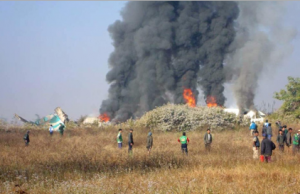 Emergencies can happen at any time, and Christmas Day is no exception. Global Rescue was ready to respond when two of our members found themselves caught in a life threatening incident while on vacation in Burma (Myanmar). Our Operations Team was notified that a plane had crashed just short of the runway at Heho airport, near the tourist destination of Inle Lake, and that there were multiple casualties, amongst them a husband and wife who were Global Rescue members. Global Rescue personnel immediately began putting the wheels in motion for the required evacuation to suitable medical care.

While the wife sustained a minor spinal injury, her husband suffered burns covering nearly 40% of his body—including his head, face, neck, hands, and feet—that required urgent attention. An IV was administered at a small, local hospital where other injured passengers from the crash were treated. It was clear though that this facility lacked the resources to appropriately treat this patient’s serious injuries. Global Rescue coordinated the launch of an aircraft to retrieve both members from the remote hospital, and to transport them to Bangkok, Thailand. Upon landing, they were met by an ambulance stationed on the tarmac and taken directly to one of the country’s leading hospitals. Here, they were met by a Global Rescue paramedic, deployed from our Bangkok Operations Center to oversee his care.  Their admittance had been pre-arranged and emergency care physicians were standing by, ready to receive them into the hospital’s Intensive Care Unit. After initial stabilization and having consulted with our specialists at Johns Hopkins Medicine; it was determined  that a transfer the best burn center in Singapore would be the next step in his fight for survival. The transfer was completed by private ICU aircraft and a seamless admission to the hospital was completed.

Understanding the complications beyond the immediate physical toll of such a trauma, our experienced Operations Specialists also attended to the finer but often overlooked details of their situation; replacing the wife’s prescription glasses that had been destroyed in the crash, relocating the wedding ring that had been cut off during initial treatment, bringing western-style food to the hospital for a comforting taste of home, reaching out to notify the couple’s daughter of any updates, and arranging a psychologist to work bedside with the couple to provide counseling after this traumatic event.

Within 2 weeks of the crash, after overseeing several skin graft surgeries, Global Rescue transported the husband by air ambulance back to his home country hospital in New York City. His wife, fitted with an orthopedic back brace, was met in New York by a member of Global Rescue’s operations team, and transported to her husband’s bedside. The couple continues to recover.