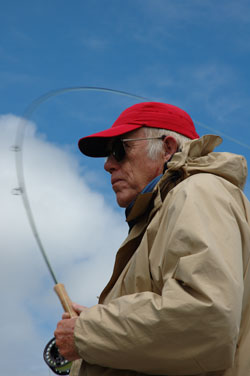 John Henry Merwin, one of America’s preeminent fishing writers, died at age 66 on Wednesday morning, February 20. He lived near the famous Battenkill River in Dorset, Vt., and died peacefully, surrounded by his family, at Dartmouth-Hitchcock Medical Center in Lebanon, N.H.

Veteran fishing editor for Field & Stream magazine, Merwin caught everything from piranhas in the Amazon to Atlantic salmon in Ireland, where his guide conceded, “You are an elegant fly caster…for an American.” He wrote or edited 15 books on fishing, including Stillwater Trout, the unparalleled The New American Trout Fishing, and best-selling Trailside Guide to Fly Fishing.

Born in Norwalk, Conn., on November 9, 1946, to Eleanor Treadwell Merwin and Augustus White Merwin, John grew up with his two younger brothers, Thomas and Augustus Jr., in an old millhouse on a Wilton, Conn., family farm, which is now Merwin Meadows Park.

John started fishing with his father at age 3 and never stopped. “From the time Dad put a fishing rod in his hand, he was obsessed,” say brothers Tom and Gus. “We all shook our heads; all he cared about was fishing.”

After attending the University of Michigan, and becoming a newspaper reporter, he married Angela Pizza in 1970 headed to Vermont to try his hand at living simply. Angela gave birth to a daughter, Emily, in 1974 and a son, Jason, in 1978. John tended cows, pigs, and chickens, and backpacked his young kids to the river to fish. He was a newspaperman, photographer, carpenter, organic farmer, and new father of two. It proved complicated.

Merwin cut his own path into the fishing industry (and everywhere else). In the mid-1970s, he picked up an issue of Fly Fisherman magazine and said, “This is awful.” He was soon working to improve it as managing editor. In 1979, out of his basement, he launched Rod & Reel magazine (now Fly Rod & Reel) to provide content with “a higher level of intelligence.” He followed that up with Fly Tackle Dealer, the industry’s first trade magazine.

John divorced and later married Martha Poole, the love of his life, and began a 30-year adventure of camping, fishing, gardening, and raising children together. Martha gave birth to their son, Sam, in 1985.

As executive director of the American Museum of Fly Fishing in the mid-1980s, John fished and worked with the legends of American angling, editing The Compleat McClane, The Compleat Lee Wulff, and The Compleat Schwiebert.

That same year, Merwin began an almost 20-year relationship with Field & Stream magazine, landing the coveted title of fishing editor in 2003, reporting on every facet of the sport with fierce honesty. Gruff, erudite, opinionated, tireless, and constitutionally candid, he was a force on the angling scene, pulling the levers of the industry from a lawn chair in rural Vermont.

“John was, quite simply, one of the most knowledgeable and experienced all-around anglers in the world—a genuine expert, but more: He was the standard-bearer of integrity in fishing journalism,” says Anthony Licata, editor of Field & Stream.

On the river, he was an artist and teacher, one who could explain succinctly why your casting stunk, as well as what you didn’t understand about work and life. “He could be blunt in his assessments, but that was just his New England way of saving time,” says former F&S editor Slaton White. “In truth, he only played the curmudgeon; he was a patient, gentle teacher.”

“John had the ability to be friend, mentor, and father all in one afternoon of fishing,” says Garden & Gun editor David DiBenedetto. “His influence on a generation of writers and editors, including myself, will be felt for many years.”

John is survived by his wife, Martha; son Jason, daughter-in-law Milena and granddaughter Cassandra (Barnard, Vt.); daughter Emily (Quincy, Mass.); and son Sam (Brooklyn, N.Y.); as well as his brothers Thomas (New York, NY), and Augustus Jr. (Marlow, N.H.). He was cremated, and his ashes sprinkled along the Battenkill. By John’s request, there is no service. In lieu of flowers, please consider a donation in his name to your favorite fishing or outdoor cause.

The family extends heartfelt thanks to doctors Sterling and Gentler and staff in the ER and ICU at Southwestern Vermont Medical Center in Bennington, Vt., and to doctors Franklin and Merrens and staff at Dartmouth-Hitchcock Medical Center.

Lives of great men all remind us

We can make our lives sublime,

And, departing, leave behind us

Footprints on the sands of time;

Footprints, that perhaps another,

A forlorn and shipwrecked brother,

Let us, then, be up and doing,

With a heart for any fate;

Learn to labor and to wait.