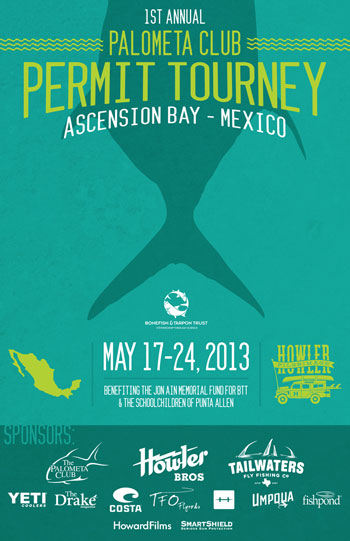 On behalf of our team at Tailwaters Fly Fishing Company in Dallas, the owners, guides, and staff at the Palometa Club in Punta Allen, Mexico, we are happy to formally announce the 1st Annual Palometa Club Permit Tournament, May 17-24, 2013 presented by Howler Brothers.

The Palometa Club is located on Ascension Bay – arguably the best permit fishery in the world.  A proper fishing tournament orchestrated and guided by the best guides in the region is long overdue.  Ten two-man teams will compete in three competitive permit fishing days during the week.  All non-tournament days will also feature individual competitions targeting Ascension Bay’s abundance of other species.
We are pleased to team up with Howler Brothers as a presenting sponsor of the tournament and the week.   Howler Brothers – an apparel company based in Austin, Texas – is even endorsing the event as it’s first “Howler Pilgrimage” and will no doubt bring along special elements to ensure that the experience goes well beyond just the competition on the water.

In addition to competing anglers and guests of the Club, also in attendance will be several fly-fishing industry friends and partners.  Jamie Howard from Howard Films and Matt Jones from The Fly Photo will be on hand in a chase boat documenting the trip and tournament.  All participants and winners will earn sweet gifts donated by Howler Brothers and additional sponsors like Hatch Outdoors, TFO, Yeti Coolers, Umpqua, The Drake, Costa del Mar, Smartshield and Fishpond.  The big winners of the permit tournament also win a gratis trip back to the Palometa Club to defend their title in 2014.

Proceeds from the tournament entry fees, calcutta, and donations will benefit the Jon Ain Memorial Fund for the Bonefish Tarpon Trust as well as the schoolchildren of Punta Allen.  Join us at this festive week of fishing with a great group of anglers and friends – and a really good party!