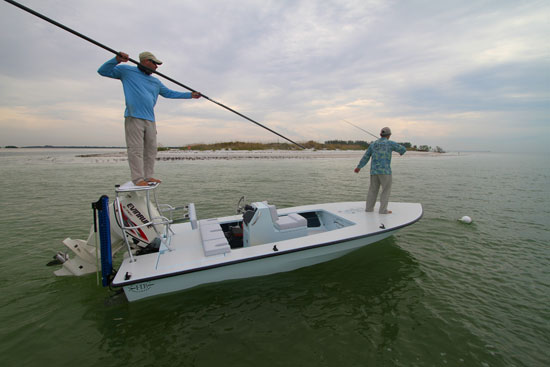 Hell’s Bay’s new 18 ft. Marquesa was specifically built for anglers to negotiate rough water conditions while having a dry and quiet fishing platform in the pursuit of tarpon, bonefish and permit.

The Marquesa, Hell’s Bay’s newly redesigned shallow water flats skiff is named for one of the most unique fly and light tackle fishing areas in the Florida Keys; an atoll 30 miles west of Key West created by a meteorite centuries ago. But to get to this lagoon circled by 10 mangrove covered islands can be challenging, especially for small fishing boats.
Targeted specifically to deliver its anglers and guides dry and happy to pursue species like bonefish and permit, Hell’s Bay Boatworks is unveiling the re-engineered and versatile 18’ 1” skiff.

“A boat, especially a small one, needs to be rugged enough to cross that six mile wide Boca Grande Channel, a hellish ever-changing barrier which turns back a majority of anglers,” said Chris Peterson, Hell’s Bay’s owner. “The Marquesa is the magic key for not only reaching the Marquesas but providing a dry ride in rough water areas along the Atlantic and Gulf Coasts.”

“Some of the finest Keys guides helped in the redesign phase. We revamped the hull by taking off the sponsons and configured the running pad for more lift and a buttery smooth ride. We moved the transom and engine back and added two inches around the deck’s lip to keep the spray underneath and the boat dryer. Its 79” beam has lots of storage and a large livewell.

“At 695 lbs (dry) it not only floats shallow with a seven inch draft and a 90 – 115 hp engine, it’s super quiet and more maneuverable when poling or anchored up,” Peterson added. “They’ve become very popular as multipurpose fishing tenders for 60+ ft. sport yacht owners.”

Hell’s Bay offers eight custom shallow-water performance skiffs and at the show will also showcase its smallest the Biscayne at 16’ 4” and its largest the Neptune at 18’ 8”.

Long known for their passion for conservation projects that give back to fishing, Hell’s Bay’s Chris and Wendi Peterson support non-profits valuing the longevity of the sport. They helped bring back to life the Herman Lucerne Memorial, a unique decade old tournament to help save fishing in the Everglades National Park. (See video at  http://vimeo.com/50200549.)

Hell’s Bay is also actively involved with the IGFA, CCA, Guy Harvey Ocean Foundation, Redbone tournaments for CF research, the retrieval of abandoned inshore ghost crab traps, and for the safe release of tournament fish it loans its huge aerated tank to many fishing events.

For more, visit hellsbayboatworks.com to view the lineups’ many features and benefits and for upcoming special events. Hell’s Bay is located in Titusville, Fla., at 1520 Chaffee Drive. Contact GM Todd Fuller via e-mail at [email protected] or phone 321-383-8223.