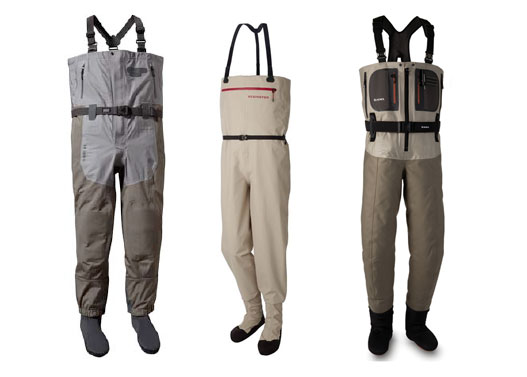 Simms has launched its new G4Z and G4 Pro waders, which feature a new five-layer GORE-TEX membrane that’s 25 percent more breathable than anything else on the market.  What does this mean in terms of wear?  I haven’t worn them in the river yet, but to the touch, they feel far more supple—like a pair of well worn jeans—than the typical wader.  They cost nearly $800 retail, which makes them the new standard for waders.

Redington and Orvis, on the other hand, are pinning their efforts to sonic seam welding on waders.  The new Redington Sonic-Pro Ultra Packable wader is notable as much for what it doesn’t have—namely weight—as it is for what it does have.  These waders are astoundingly light at 30.4 ounces.  As the name implies, they are very packable, though also durable with four-layer construction.  Price is $289.95.

Patagonia is also out with new waders for 2013, including the updated zip front Rio Gallegos wader, which uses a new “single seam construction” and retails for $599.