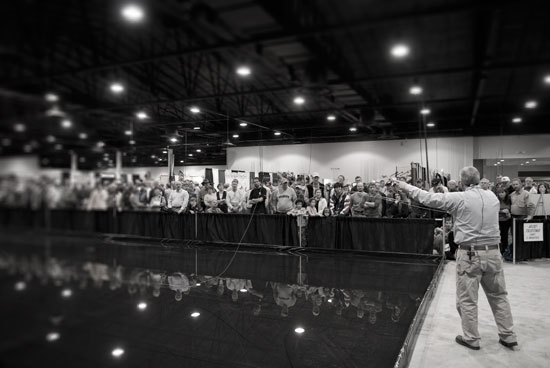 It’s the dead of winter, many rivers and lakes are frozen, and fly fishing aficionados are aching for a reason to get outdoors.  Which can only mean one thing: The consumer outdoor and fly fishing show season is about to kick off in earnest.  Many retailers, manufacturers, and media will be taking part.

The Fly Fishing Show will be making its traditional stop in Denver, Colorado, on January 6-8, and will feature its usual long list of experts, exhibitors, and fly fishing luminaries.  The Somerset, New Jersey, show will be January 27-29.  Now celebrating its 20th anniversary, Somerset will include a showing of films from the International Fly Fishing Film Festival for the first time ever on Friday the 27th at 6:30.

The International Sportsmen’s Exposition (ISE) not only features a strong fly fishing showcase, but reaches all outdoor aficionados, from conventional anglers to hunters, of all ages. The 2012 ISE schedule kicks off in Denver at the Convention Center on January 5-8 with 500 companies exhibiting in a 290,000-square-foot expo hall.  That’s followed by stops in Sacramento (January 19-22), Las Vegas (February 2-4), Phoenix (February 23-26), and Salt Lake City (March 15-18).  ISE is a truly one-of-a-kind showcase of the outdoors.  For information please see www.sportsexpos.com.