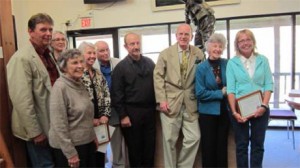 This honor is bestowed on those who have made a significant contribution to fly fishing and to the history of the sport for all.

Doug Swisher (Hamilton, MT), Cathy and Barry Beck (Benton, PA) were present to personally accept the award in addition to Alecia Richards and Celia Haig-Brown (accepting for deceased husband and father respectfully). There were no family survivors to accept the award on behalf of John Alden Knight. Previous Hall of Fame recipients Joan Wulff, Mary Dette, Al Caucci and Art Lee were present for the ceremony.