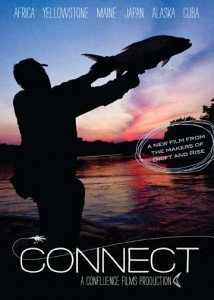 BOZEMAN, MONTANA 11/1/11— Confluence Films, the creators of Drift and Rise, announced today that the new feature-length film, Connect, has been officially released and is now out and available on DVD and Blu-Ray disc. This latest film, shot around the world in Japan, Maine, Cuba, Alaska, Yellowstone National Park, and Tanzania, Africa, has already received rave reviews from early screening events and regional premieres that have taken place throughout the country over the past few weeks.

The world premiere of Connect took place in Bozeman, Montana on October 7, 2011, where the movie was shown to a packed crowd of 450 industry people, members of the media, and sponsors at the historic downtown Ellen Theatre. Since the initial premiere, Connect has gone on to screen in over two dozen cities and assorted venues over the past four weeks, including Portland, Oregon, Seattle, Washington, Denver, Colorado, Salt Lake City, Utah, Jackson, Wyoming, and Brunswick, Maine.  Confluence Films offered conservation groups, fly fishing retailers, and fishing clubs the chance to screen the new film before the scheduled November release as a way to raise money for fisheries-based conservation projects and causes. The only stipulation with these screenings is that all profits must go to conservation efforts on the local or regional level. Over $25,000.00 for fisheries-based conservation efforts has been raised throughout the country in the past month alone.
As with Drift and Rise, Connect is the result of a partnership by Director and Cinematographer Chris Patterson of Warren Miller Entertainment and Executive Producer and Writer Jim Klug of Yellow Dog Flyfishing Adventures.

Connect DVD’s and Blu-Rays are available for immediate purchase through the Confluence Films website (www.confluencefilms.com) and will be available through most specialty fly shops in the days and weeks ahead. DVD’s are $29.95, and Blu-Ray discs are $39.95. Connect trailers can also be viewed at www.confluencefilms.com.  Pre-orders that have been placed up to today’s date will all ship on November 4, 2011.

“Confluence Films has done it again! With winter just around the corner, this will have you longing for next season … dreaming of that trip of a lifetime.”
–    Kevin McKay, Maine Fly Fish

“I thought the film was amazing … breathtaking … fantastic. I was on the edge of my seat the entire time.”
–  FlyFishilicious.com