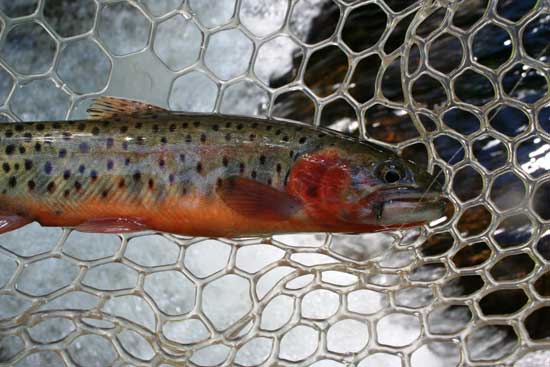 DENVER, Colo. — As part of Great Outdoors Week, Trout Unlimited (TU) members and staff traveled to the Bard Creek roadless area Thursday to fish for the elusive Greenback cutthroat trout. The day trip, taken not far from the I-70 corridor near Empire, was taken to highlight the importance of roadless areas to sportsmen and women in Colorado.

“Roadless areas are absolutely essential to coldwater fisheries here in Colorado,” said Aaron Kindle, TU’s Colorado Field Coordinator. “For native trout, their habitat is disproportionately located in roadless areas. For the rest of our coldwater fish such as rainbow, brook and brown trout, they all live in rivers and streams whose headwaters are in roadless areas. If we don’t take care of our headwaters, we won’t have the excellent fishing downstream that we enjoy today.”

Trout Unlimited chose to take part in Great Outdoors Week to highlight a current threat to these key backcountry lands. Representative Kevin McCarthy (R-CA) recently introduced H.R. 1581 – the Wilderness and Roadless Area Release Act of 2011 – that if passed by Congress would release over 43 million acres of backcountry public lands from roadless protections and pave the way for significant development.

“I don’t think people realize how critical roadless areas are to sportsmen,” Kindle said. “Here in Colorado, our top fifteen game management units all contain over 66,000 acres of roadless lands, and all of our major rivers have headwaters in these areas as well. If we don’t keep our backcountry lands intact, hunting and fishing as we know it might cease to exist.”

TU maintains that Rep. McCarthy’s bill – dubbed the Assault on our Sporting Heritage Act by sportsmen – fails to take this into account and attempts to throw away a nation’s sporting opportunities for questionable short-term economic gains. In addition, the bill could damage Colorado’s economy by reducing the steady income provided to the state’s rural areas each year by returning hunters and anglers. “The beauty of keeping these areas intact is that the benefits never go away,” Kindle added. “Keep them intact and we’ll always have fishing, hunting, and outdoor recreation. Develop them, and the benefits could go away for good.”

“I love the adventure and excitement of coming to a pristine area that has native fish,” said John Davenport, a member of TU’s Denver chapter. “There’s always something unique about traveling to a backcountry area to seek fish that have been in this creek for thousands of years. As we made our way up the creek, it became clear why fish and game prefer these undeveloped landscapes. It became quieter, the signs of houses and roads dissolved, and the water in the creek became increasingly clear and cold. In order to fish for these amazing trout, you have to venture into the backcountry.”

Bard Creek is small, but creeks like this are critical to the Greenback cutthroat trout. And while the anglers on Bard Creek didn’t catch many of the brightly colored wild fish, they ended their adventure satisfied by the unique sights and sounds of a day spent in the roadless high country. “We got to spend the day in area that reminded us of yesteryear,” Davenport said. “The stream was cold and clear, the views were impeccable, and the sense of adventure was tangible. I hope that our children and grandchildren can come to places like this and mingle with wild creatures in ways that humans have done for millennia. We can’t let opportunities like this slip away.”

Trout Unlimited is a private, non-profit organization with 140,000 members dedicated to conserving, protecting and restoring North America’s coldwater fisheries and their watersheds.