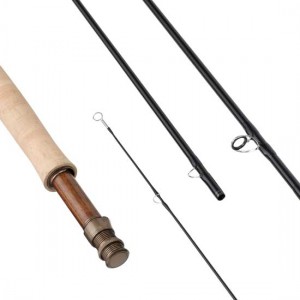 Sage Manufacturing made a splash at the recent European Fishing Tackle Trade Expo (EFTTEX) in Amsterdam when it unveiled its new rod line called “ONE.” One, well, won “best new fly rod” honors at EFTTEX.

The company subsequently made a press announcement in the United States last week to introduce ONE.

The value platform for the ONE series is accuracy. And the company is basing its performance claims on something they call “Konnetic” technology, which has to do with how the carbon fibers are aligned in the rod during manufacturing, and what resin-carbon ratios are employed.   From the Sage release: “The ONE offers exceptional tracking with virtually no lateral or torsional movement, resulting in astonishing casting accuracy that is unparalleled in the marketplace. The inherent strength of Konnetic technology allows ONE rods to have a smaller diameter and are 25% lighter than comparable Sage rods. These attributes combine to provide augmented aerodynamic efficiency. Further innovations are the 70% lighter, low profile ferrules that help direct and carry energy through the rod without sacrificing strength, critical action and feel.

“The ONE rod becomes a true extension of the angler’s arm,” notes Sage chief rod designer, Jerry Siem. “It offers a more fluid transmission of energy from the arm to the fly. The eye sees the cast it wants to make and is translated to the hand through the rod instantaneously.”

The accuracy platform is no doubt a shrewd move, as we’ll be hearing plenty about new rods from other manufacturers that can punch farther casts in extremely windy conditions (just like we do every year).

What’s a little more curious, however, (and what has the message boards and forums at Angling Trade and elsewhere buzzing) is Sage’s decision to formally debut the rods in Europe, and then let the news “break” in the U.S. as what was, for all intents and purposes (like the discontinuation of Z-Axis) a weakly guarded secret.

A matter of timing and opportunity? We put the question to Marc Bale, vice president of sales for Sage/Far Bank, and here’s what he said:

“The simple answer is that Far Bank/Sage is a global company and EFTTEX is a global show.  At this year’s venue in Amsterdam, I spoke personally with dealers or distributors from South Africa,  Dubai, Argentina, Chile, New Zealand, Australia, Japan, Canada and the US, as well as from almost all of the countries in our European dealer base.  As many of these participants do not make it to IFTD,  it is our only opportunity to interact directly with them, demonstrate product on the casting pond, answer questions, and discuss pricing and programs for the upcoming year.  I also conducted interviews/photo shoots with media from Australia, China, South Africa, France, Holland, Germany, Denmark, and the UK.

“In the past we have never featured our new products at EFTTEX.  We typically would take them with us, keep them out of sight, not enter them for any of the new product awards, and only show them to our distributors who typically need longer lead times to get ready for the new season.  But with the growth of the global angling press who attend EFFTEX and in line with my earlier comment about Far Bank/Sage being a global company, this year we decided we would put our new rod, the Sage ONE, in the booth for dealers as well as distributors to see.  We also determined to enter it in the Best New Fly Rod competition.  Our intent here was simply to get the word out about this new rod introduction from Sage.”