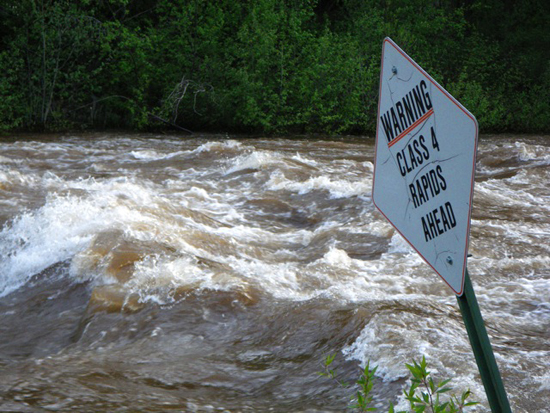 Throughout much of the country, the first half of the 2011 fly fishing guiding and retail season can adequately be summed up in two words:  high water.

The impact is particularly felt in the West, where record or near-record snowfall amounts extended well into late spring, and then were met with near record heat.  The result was a sudden deluge that sent many rivers from Montana to New Mexico to historic levels.

Examples: The Colorado River at Glenwood Springs reached an
25,000 cfs on June 25.  In Montana, it’s worse, with gauges recording readings that cause double-takes (17,000 cfs below Holter Dam on the Missouri, 15,000 cfs on the Bighorn… and some snow drainage basins saw snowpack exceed 600 percent of normal.

While from a ecological standpoint, the 2011 high waters might ultimately be remembered as much needed, debris-flushing floods that enhanced fisheries that had struggled with the effects of consecutive low water years (and the last half of 2011 could bring epic conditions)… for the retailer, things have been washed out.

To help businesses unable to book guide trips, and sell gear to shore-bound anglers, Patagonia unilaterally extended an extra 30 days of dating on any open invoices on orders shipped by the company on or after March 15.

This includes 73 dealers, all of the company’s retailers in Montana, Wyoming, Idaho, Colorado, California, and other western states.

“We are in it to work together with the retailers, and we know what challenging natural conditions can do to work… so we decided it would be good to give our dealers some extra breathing room,” said Brian Bennett, fly fishing sales manager for Patagonia.

Angling Trade is interested to hear from shop if and how other manufacturers have assisted, as well as how this gesture has specifically helped your operations.