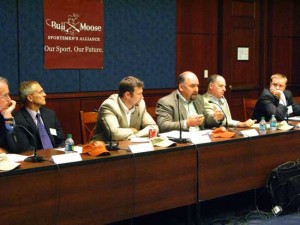 That was among the key messages at a recent “Fly Out” event on Capitol Hill in Washington, organized by the Bull Moose Sportsmen’s Alliance (www.bullmoosesportsmen.org), an innovative organization created to bolster the sportsmen’s conservation movement.  Secretary of the Interior Ken Salazar, as well as Senators Mark Udall (D-CO), Jon Tester (D-MT), and James Risch (R-ID) spoke at the event, all acknowledging the link between hunting, fishing, natural resources, and the economy.

According to the US Fish and Wildlife Service, hunters and anglers and wildlife-related activity generate $122 billion dollars annually for the national economy. In fact, according to Congressional Sportsmen’s Foundation, spending by hunters and anglers is more than the revenues of Microsoft, Google, eBay and Yahoo combined.

Montana, with a population of just under a million people, sees an annual tourist influx of 11 million people… a significant portion of whom are drawn specifically for hunting and fishing.

Nationwide, the outdoor industry accounts for approximately 7 million jobs, according to congressional data.

“It’s time that many Americans, particularly those who draw their livelihoods from the outdoors industry realize that our nation’s “conservation deficit” is just as real and just as much a burden for future generations as any financial budget deficit,” said Kirk Deeter, editor of Angling Trade, who sat on a special panel discussion with AFFTA Board Member Tom Sadler, State Senator Kendall VanDyk (D) from Montana, State Representative Nate Gentry (R) from New Mexico, Gary Taylor, Director of the Association of Fish and Wildlife Agencies, Steve Moyer, VP of Government Affairs for Trout Unlimited, and Gaspar Perricone, co-director of the Bull Moose Sportsmen’s Alliance.

What can a fly manufacturer or retailer do?

2.  Realize that the health of the fly market is at stake, and contact their government representatives to voice concern over drastic cuts to wildlife, habitat, and conservation programs resulting from H.R.1 and H.R. 2112.

And more.  See bullmoosesportsmen.org for details.

Conservation is not a political issue, it is a cultural issue.  More and more, we’re understanding that it is an economic concern as well… especially for the fly fishing industry.