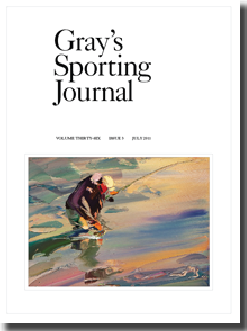 Gray’s Sporting Journal today announced that its new angling columnist will be Miles Nolte, filling the column slot held by editor James R. Babb for 16 years. Nolte was born and raised on O’ahu and caught his first fish at age four in the Yellowstone area. Since then, he’s been a fishing guide in Montana and Alaska, and a school teacher in Botswana (where he managed an occasional tigerfish on the fly). Most recently, he wrote an account of his adventures guiding on Alaska’s Alagnak River. The Alaska Chronicles (Departure Publishing, 2009) is based on material drawn from Nolte’s live blog on The Drake’s website and is one of the freshest, edgiest, funniest, and most thoroughly addictive works of fly-fishing literature to be published in recent memory.

Jim Babb, who will continue as Gray’s editor, writes that “when I decided to retire as angling columnist, I expected choosing the right voice from among the hundred-plus sample columns from sixty-plus eminent fishing authors would be difficult, but as I read and re-read the submissions, one writer rose clearly from the pack-for his knowledge, for his self-deprecating humor, his insights, his elegant, unlabored, and unselfconscious turns of phrase. Miles Nolte is a fishing writer I could spend the next twenty years reading. He’s also one I hope to spend the next twenty years editing.

“  Nolte’s first column will run in Gray’s March/April 2012 Fly Fishing Edition, but he will begin working with the 2012 Expeditions & Guides Annual to be published in December 2011. He will also attend the International Fly Tackle Dealer Show with Gray’s staff in August 2011.  Meanwhile, Nolte expects to continue guiding summers in Montana, and during winters he’ll finish his masters in composition studies at Montana State University.

Meanwhile, Nolte expects to continue guiding summers in Montana, and during winters he’ll finish his masters in composition studies at Montana State University.