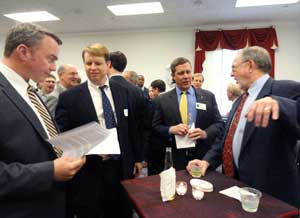 The American Fly Fishing Trade Association’s keystone events landed in Washington, DC in mid-April carrying the message of the importance of fishing, conservation and the fishing industry.   The Jim Range National Casting Call and the Family and Youth Casting Call allow AFFTA and its many partners to have personal connections with not only government decision-makers but also the children and families that represent the future of fishing.

The focus of the Capitol Hill reception was to honor two members of Congress with the new Jim Range Legislator of the Year awards.  Congressman Mike Thompson is an avid fly fisherman – who reportedly makes it a tradition to fish on Election Day with great results – and a strong champion for fishing on Capitol Hill.  Rep. Thompson has led efforts to protect salmon and steelhead in the Klamath River and has worked to advance tax credits for land conservation efforts.  Senator Mike Enzi has been an active supporter of the Jim Range National Casting Call for years and is the only member of Congress to attend every Casting Call over the past decade.  He also has been a friend to the fly fishing industry by championing legislation critical to small business as a member of the Senate Finance Committee.

The sport of fly fishing and the fly fishing industry have many friends on Capitol Hill and in Washington DC and we heard a number of great fishing stories at our Fishing for the Future reception,” stated Jim Klug, chairman of the AFFTA board. “We are here to thank them and to remind them that issues such as clean water, habitat and access are essential to America’s 38 million active anglers and the fishing industry.”

On April 15, the JRNCC moved down to Fletcher’s Boathouse in the C&O Canal National Historical Park to fish during the annual shad run up the Potomac River. The goal of the event is to give members of Congress, agency officials and congressional staff the opportunity to connect the legislative work they do for fisheries conservation and fishing tackle trade issues and to see firsthand how creative conservation is making a difference for fisheries across the country.

Understanding and supporting the expansion of those types of public/private partnerships through the National Fish Habitat Action Plan (NFHAP) has been a focal point of the JRNCC.  This year, NFHAP unveiled its 50th Waters to Watch Project as well as honoring individuals and groups for exceptional achievements through the National Fish Habitat Awards.  The Action Plan also unveiled its 2010 Status of Fish Habitats Report titled; Through a Fish’s Eye: The Status of Fish Habitats in the United States 2010.  The report is a first of its kind status of fish habitats in the United States as envisioned in the National Fish Habitat Action Plan. Through a Fish’s Eye summarizes the results of the first detailed national assessment undertaken by scientists working to synthesize information on aquatic habitat at a scale and level of detail never before attempted. This report focuses on the freshwater and estuarine aquatic habitats of the 50 states, which are divided into fourteen sub-regions for discussion.

“The work that went into the assessments to write this report, were incredibly detailed and help paint the most accurate picture of what our National habitat looks like as a whole,” said Kelly Hepler, Chairman of the National Fish Habitat Board.  “Working across boundaries and in partnership was the true reason that this effort worked and help meet critical objectives for the National Fish Habitat Action Plan. Announcing the release of this report at the Casting Call events was critical to helping raise the level of awareness of this report, especially through the Capitol Hill reception that was associated with this event.”

Regrettably, the final event of the weekend is the Family and Youth Casting Call (FYCC) had to be cut short due to severe weather in the Washington, DC region.  Now in its fifth year, the FYCC is co-hosted by AFFTA and the National Park Service (NPS) and is intended to get kids hooked on fishing and the great outdoors and to showcase one of the great places to enjoy nature right in their backyard. The annual free event features fishing instruction, nature activities, and the National Park Service Junior Ranger program all within the city limits of our nation’s capital. The C&O Canal is netted and stocked with fish donated by the District Department of the Environment who also provides anglers with a free day’s fishing license for the event. Even with the rain and before the event was called off, nearly 75 children and adults tried their hands at fishing and many fish were caught.

“The rain didn’t dampen these kids’ spirits and there is nothing better than seeing these new, young anglers’ faces when they catch a fish,” commented Jim Lepage, Vice-President of Rod & Tackle for The Orvis Company.  “Helping these children accomplish this goal gives them the opportunity and the confidence to enjoy the outdoors. It helps them break that barrier between their TV and their backyard.”