AT asked former hackle industry insider Steve Schweitzer (now the author of the awesome A Fly Fishing Guide to Rocky Mountain National Park) to take a closer look at the “Hair Today, Gone Tomorrow” issue… and here’s a an excerpt of what he had to say .  You can read the full story in the next print issue of Angling Trade magazine.

By Steven B. Schweitzer

Author’s note: Interviews of industry leaders were conducted in support of this story.  Most of the interviewees preferred to keep anonymity in exchange for sharing insightful commentary.  With respect for those who contributed, identities are withheld; and the quotes remain true.

Internet shops like finefeatherheads.com, dohairextensions.com , conditionculture.com and others are glamourizing in-hair feather extensions with slick marketing video and Victoria’s Secret-like models sporting hair feather colors like bubblegum, marine, taboo and swiss.  (Fly tiers formerly knew the feathers by pink, light blue, purple, and coachman, respectively.)  During a recent interview with a distributor in the fly fishing industry, it was quoted “Within a month the fashion demand has sucked our micro industry supply dry”.  I love this statement…a “micro industry” – this hits the nail on the head.  Let’s set some context.

The fly fishing biz is estimated to be a $700-$900 million dollar industry by most accounts, although the figure can be debated and is speculative (a topic for another day).  Suffice it to say, it probably isn’t a billion dollar industry.  Here’s the context: In a prior life, I was a controller for a division of a Fortune 100 company that was larger than the entire fly fishing industry itself.  That’s right, there are divisions of global companies larger than the entire fly fishing biz itself.  Now that we understand the economically puny nature of this industry, let’s evaluate what the hair-hackle craze exposes in our industry today.

How long will the fad last?

It is estimated at just under a year, the craze has swept the nation coast-to-coast.  January-February 2011 have been the crest of the craze thus far.  Just ask any salon owner or mid-market fashion supplier, they were the first to put hackle in hair.  “I’ve lost track of the number of calls I’ve received telling me they were the first to do this and we should supply them.  I can hear the eyelashes batting over the phone, in an effort to appear honest and innocent”, said one hackle grower interviewed for this report.   Another hackle grower stated they are taking 20-plus calls a day from salons and the like.  “No matter when the demand started, we are a year behind”, a grower stated.

The hockey stick growth rates are in large part due to recent popularization on the world’s stage: TV.  The popular TV show, American Idol, has judge Steven Tyler wearing a feather in his hair.  And what about a key vendor to Home Shopping Network recently wanting to do a “trial run” of selling hair-hackle packs consuming an estimated 15,000 saddles in a weekend run?  Fifteen thousand saddles?! That’s more than some growers can produce in a year.  The vendor didn’t get the supply by the way, there simply aren’t those quantities available.

·The introduction of knock-off’s typical flag the beginning of the end of a trend.  However, with feathers, it’s tough to create a knock-off – It’s the real thing or nothing.  A substitution product is a different story.

·Another school of thought is the more difficult the look is to pull-off, the shorter the trend.  The jury is out regarding hair feather extensions, but early indications suggest the look is not so difficult to sport.

·The higher the profile, the shorter the lifespan.  The recent TV coverage of stars fancying feathers in their locks suggests the high profile is here.

·Fashion forecasting is turning to monitoring social media posts for mentions of key words that support hot-or-not topics.  Searching for “Feather hair extensions” yields plenty of social media mentions, but how to turn the searches into meaningful data is still a developing science.

·Another fashion prediction tool says if the consumer has the buying power, the trend will last longer. Of course, buying power is a function of affordability and good supply.  The feather extensions are affordable to the fashion conscious, but as for supply…well, that’s where our longevity clues start to align.  There clearly isn’t enough supply to support this trend until next year.  Typically, a fad will end when supply meets demand.  But in this case, it’s looking like the fad will end when supply extinguishes demand. 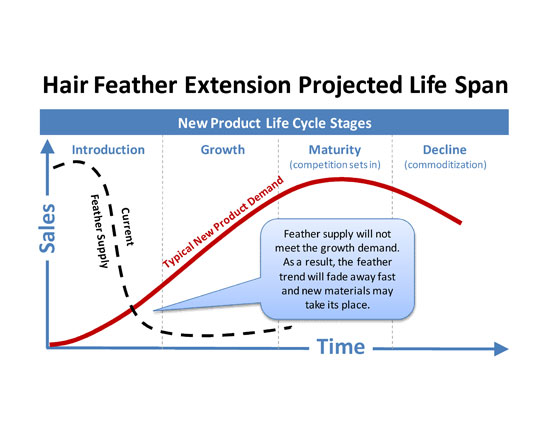 Fashion trends can be measured in a three-step cycle not unlike a typical product life-cycle chart, shown in Figure 1.

Phase I – Emerging Trend. You see the fashion primarily with prominent personalities on TV, in magazines and fashion runways.

By all accounts, the hair fashion craze is clearly in Phase II and unlikely will ever make it to Phase III.  By summer, this fad just might be extinguished not because of a popularity decline, but because the behemoth fashion industry took one bite and swallowed up the usable supply from the appetizer-sized fly tying market.

(Read more in the next Angling Trade)…