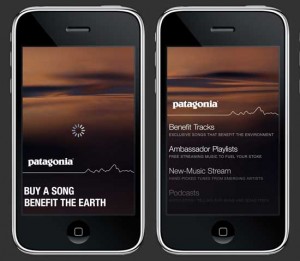 “Musicians have been interested in partnering with Patagonia on our environmental work for years, but we didn’t have the right platform to work together effectively,” notes Rob BonDurant, Patagonia’s vice president of marketing, “The Music Collective provides us with a way to partner directly with enviro-minded artists and to engage their fans in environmental efforts. It’s truly a new model for green giving.”

The collective encompasses all genres of music everything from pop to roots music, reggae to indie rock, jazz to alt-underground country, and supports a similarly diverse range of environmental action. By featuring previously unavailable material from both established and rising artists, the Patagonia Music Collective aims to engage a diversity of fans of every stripe and encourage them to continue to support music and musicians. Like not recycling or any other action that does not take into account the value and scarcity of resources, not paying for music is consuming without conscience. fans directly in environmental giving.

“My hope is that fans see their favorite artists supporting the environment and want to get involved themselves,” notes Patagonia founder and owner Yvon Chouinard, “The groups these musicians are supporting are the ones that are ultimately going to save the planet. Patagonia’s hopeful other musicians will see that by just donating a song they can easily provide their favorite enviro group with a new stream of financing.”

The tracks will be available at www.patagonia.com/music, through a dedicated iPhone app and a web widget at participating artists’ websites. Fulfillment will be handled by iTunes. The program will roll out internationally in Japan, the UK, Canada, and elsewhere this June.

About  Patagonia, with sales last year of over $333M, is noted internationally for its commitment to product quality and environmental activism. Incorporating environmental responsibility into product development, the company has, since 1996, used only organically grown cotton in its clothing line. In Fall 2011, the company’s entire product line will be recyclable thorough its Common Threads Recycling Program. The company also advocates corporate transparency through its interactive website, The Footprint Chronicles, which outlines the environmental and social footprint of individual products. Patagonia was featured as The Coolest Company on the Planet on Fortune Magazine’s April 2007 cover.