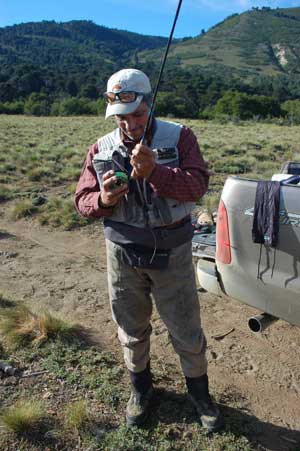 G.Loomis NRX… Yeah, It’s All That…

One of the things we will never do at Angling Trade is write an opinion or review of a product until we’ve actually fished with it, in it, or on it.  We’ll run press releases on our website, we’ll tell you when certain things are available, and we might convey what someone else—including the promo-speak from the manufacturer—thinks… but you’ll never see a “thumbs-up” or “thumbs-down” comment with an AT label until we’ve fished it.  House rules.  (Granted, you might disagree, and tell us where to stick that thumb, based on your own experience… but in terms of subjective reviews, ours only happen after we’ve taken something on the water.)

As such, I have been waiting for several months to give the new G.Loomis NRX a good test drive on the river.  I did the casting pond shebang, and thought it felt right… but casting in a three-inch deep plastic pool is not fly fishing, no matter how you slice it.

Casting at wild browns, rainbows, and brook trout in a remote and relatively untamed region of Argentina (in and around the northern Patagonia village of Alumine)… all sight fishing… all clear water… well, that is a real test.

And there, the NRX proved to live up to its hype, at least in my mind.  And also in the minds of the local guides I fished with.

Felipe Morales, a truly gifted angler and caster who hails from the first family of Argentine fly angling, eloquently described rod action this way: “There are rods that are meant to throw flies, and rods that are built to cast lines (and flies).”

He’s right.  And in that context, the NRX is a supreme casting tool.  It isn’t built for hoofin’ and chuckin’… though it can do those things if you ask it to.  When the NRX really shines is when you stroke the cast.  NRX was designed with guidance from Steve Rajeff—arguably the best pure caster in the world—and when you emulate the Rajeff style… precise timing and position, straight overhead, clean… by the book… that’s when you fall in love with the rod.   It loads smartly at short distances, and rolls well also.  It will shoot line at long distances, and bust loops through the wind, even with heavy hopper flies.  But (with the 9-foot, 4-weight I played with) the happiest moments came at 30-50 feet, when I was trying to accurately, gently plop gentle dry fly presentations in tight pockets.   It’s a very true rod… an honest rod.  It won’t necessarily cover up flaws, but it will reward the perfect (or close to perfect) rhythm and timing.  Always.  And when all is said and done, there is no higher accolade for a top-end rod in this market to attain.

I fished it on spring creeks, lakes, and wide rivers.  I landed big trout (2-foot-plus browns), and smaller bows and brookies.  On delivery, it rated a 10.  On the fight, it also rated 10.  I will take it anywhere.  It’s a very clean, reliable, comfortable, and enjoyable fly fishing (not just casting) rod.  It is, in my opinion, one of very few modern generation rods that completely lives up to its billing.