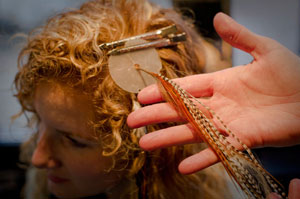 d, the New Style Twist Has Fly Shops (and Salons) Counting Their Chickens… By Tim Romano and Kirk Deeter

If you wake up one morning and notice all your fly tying hackles are gone, check with the Mrs., or perhaps your daughter. Seems that one of the newest and hottest style trends involves using premium hackle as women’s hair extensions.

The idea took off in and around Boulder, Colorado, but has since spread to California and elsewhere. They are called Feather extensions… extensions bonded with carotene wax. Cost is $5 for one feather, and up to $25 for 5-7 feathers. (You do the math to value a typical cape of feathers in a busy salon.) The more expensive versions are called “couture” feathers and feature the best hackle available… hence the sudden massive demand for fine feathers. The extensions last in hair for about 2 weeks (cold fusion), or up to 2 months for the hot fusion variety.

And the lady who takes credit for starting the boom–Joy Douglas, owner of Zing Hair Salon on Spruce Street in Boulder–says it isn’t slowing down any time soon. (For what it’s worth, Miley Cyrus was recently seen gracing a magazine cover with a feather extension… we can only imagine what will happen now.)

In fact, Ms. Douglas literally drove to Whiting Farms one night to lock down as much product as possible.  She claims that Dr. Tom Whiting doubled prices on her overnight when he realized the quantities she was willing to buy.  She has since had a major problem getting feathers and is trying to source from anywhere she can. Her main sources are Metz and Whiting.

Of course, all of this raises an interesting question… is this a new “twist” on a sales opportunity for fly shops… a nightmare waiting to happen for fly tiers… or both? No question, if you have hackle in your shop, you might look at its value in a different context in the near future.

No question, sales are up. Said Jon Spiegel area manager of Front Range Anglers in Boulder: “We can’t keep hackle in stock in the shop. We get it in and the next thing I know some gal comes in and buys all the hackle we have.”

And the demand stretches at least as far as California. In fact, we heard from Bob Marriott’s Fly Fishing Store in Fullerton, California, that they’ve sold thousands of dollars in hackle; one day alone, they were approached by a woman who wanted to place a $10,000 order (but alas, they didn’t have the inventory/ability to fill it).

Which leads us to the flip-side concern… the lack of product availability.

Malcolm Robertson, an avid fly tier from Colorado said: “I just went to my fly shop, and they were completely out of hackle.  None, Zip…  I wonder what’s going on there? I can’t believe that fly shop is OUT of hackle.”

More than likely, Robertson won’t be the only one left wondering in the near future. It seems, after all, there are only so many chickens to go around, and the hairdo craze is putting a serious crimp on inventory that might otherwise go to fly tiers. Will hackle providers amp production? Can they? Will some hackle companies favor fashionistas over the fly shops? And is that fair or… well, fowl?

The thought of what might happen is enough to get anyone’s, um, hackles up…

*Thanks to Steve Qualline of Bob Marriott’s for the lead on the story… we’re only starting coverage, with a full follow-up feature now in the works. Let us know, please if the hackle hair extension phenomenon has reached your area… or is impacting your business and how.