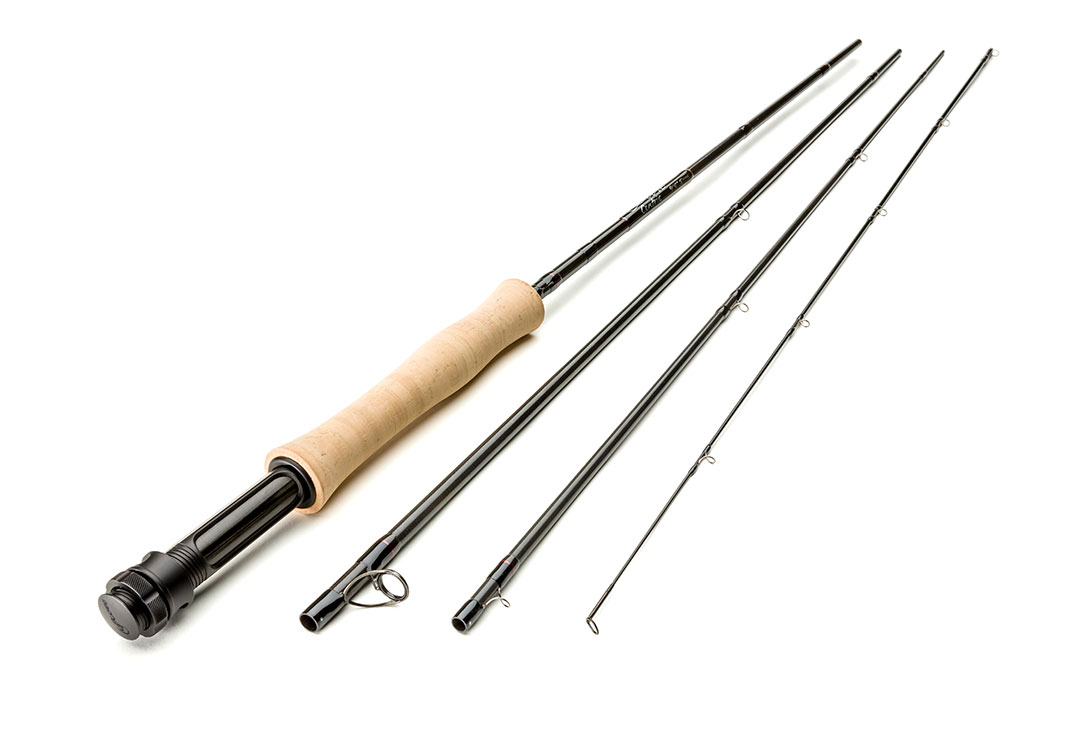 After a month of being sworn to secrecy, I can let the cat out of the bag… and it’s a tiger.

When the tube arrived from Scott, I expected it to be something special.  So, I wanted the first analysis to more than a cursory shakedown.  I headed to the grass field behind my house for some quality one-on-one time, poured myself a small mason jar of red wine, put on some Bose noise-cancelling headphones, strung up the rod, and got ready to “dance.” I put my playlist on shuffle, the first song that came on was AC/DC’s “Hell’s Bells.”

There could not have been a more appropriate coincidence.  With those first ominous tolls and grinding guitar lead, I started making some short-to-medium casts, and I could feel it—and see the Centric’s character—right away.  Fast action, yet razor sharp, crisp like a freshy-printed 100-dollar bill. Silly accurate.  I was willing the shots rather than pressing them.

I cued up the entire “Back in Black” album and burned the majority of the next hour casting to driving rhythms, from “Shoot to Thrill” to “Shake a Leg” and “You Shook Me All Night Long.”

I was indeed shaken. I mean (in a good way), I’d always gotten more of a “bluegrass” vibe from Scott Fly Rods.  But even at first glance—a black tube… dark, un-sanded blanks with subtle yet provocative red thread wraps at the ferrules (pretty close in color to Angus Young’s candy-apple red Gibson SG)—Centric exudes a spicy, almost sinister character, and I think that reflects the action of the rod itself.  To be clear, this is not a “bad boy,” flamethrower, power for the sake of power-type rod, rather it’s a finely tuned instrument that also packs a little growl.  It doesn’t say “in your face,” so much as it says, “I’m done messing around.”

That all starts with blank recovery and stability. In other words, you make a cast, and the rod snaps back in line without volatile tip wobble.  Think of it like a ski that carves on ice or in powder without too much chatter or drift.  Says Scott: “Centric rods combine new tapers and multi-modulus lay ups with a new resin system to increase fiber density and reduce weight, and they feature our new generation ARC reinforcement for greater stability along multiple axes. New custom rolling equipment allows us to control fiber placement and density with new levels of precision.”

How does that translate to feel?  Well the rod is noticeably light, and I think well-balanced.  If you were to hang it on a nail (or your finger) without a reel, the center balance point is just a smidge past the 20-inch indicator mark (a handy standard for truth-seekers on Scott Rods), which is right where it should be to most efficiently transfer the flex and load going on in the top 7-plus feet of the rod into the grip where the angler feels it and reacts accordingly.

The grip itself is tapered in a way that encourages the caster to apply more pressure where appropriate, and less where it’s not.  Titanium stripping guides with super-slick zirconia inserts also help make Centric the best line-shooting 5-weight I’ve cast, especially if you match it with a premium line, like the new RIO Gold Elite with the Slick Cast coating (which is what I did), or a Scientific Anglers Amplitude Infinity Smooth line.

I’ve taken the Centric from the grass to walk-wades on small and medium streams, float tubing in reservoirs, and several days fishing from the dory on the Colorado.  I’ve fished it about 20 days now, and like it more each time.  Cutting right to brass tacks, I’ll say that Centric does everything that its predecessor, the highly-awarded “Radian” does in terms of combining feel with fast action.  It’s just that Centric has a little more refinement and moxie.  Like it’s tuned up just a bit better.  Not tighter… better, like more lasting in tune.

Pros:  Intuitive accuracy, especially in the right hands.  Extreme efficiency translates to ease of effort (you don’t have to work this rod to form tight, flat loops).  Forgiveness to those who tend to overpower or underpower a casting stroke. Crisp roll casting/mending action.  Awesome feel from tip to grip that helps casts and fish fighting equally.

Cons: Not many.  Some might have wished for Recoil guides. It’s not particularly suited for dropping delicate baby-tear casts inside 15 feet (but no fast-action rod is, and even at 20 feet, Centric is pretty nimble).

I was the guy who questioned in Field & Stream magazine seven years ago whether the Radian was the best fly rod ever. Believe me, I would have been sorely disappointed if Scott had strayed off course with a “New Coke” version of  Radian.  And I would have said so.

Scott didn’t do that.

Kirk Deeter is editor of Angling Trade Media, which has been covering the American fly fishing industry for the past 15 years.  He’s also the editor of Trout Media, and a contributing editor for Field & Stream.