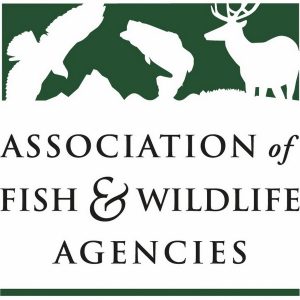 From Responsive Management and the Association of Fish and Wildlife Agencies

A new survey conducted by Responsive Management finds that 70 percent of Americans support the Recovering America’s Wildlife Act, pending federal legislation that would allocate an additional $1.4 billion in annual funding to state agencies and tribal land managers for wildlife conservation.

State-level wildlife conservation efforts in the United States have historically been funded largely by hunters and recreational shooters through an excise tax on their purchases of firearms, pistols, and ammunition. This funding mechanism was created in 1937 through the Federal Aid in Wildlife Restoration Act (often referred to as the “Pittman-Robertson Act” for the legislators who sponsored it). Because Pittman-Robertson funding comes mostly from sportsmen and women, it has generally been used by state fish and wildlife agencies to manage game species. For instance, Pittman-Robertson excise tax revenues have helped to fund the recovery of white-tailed deer, Rocky Mountain elk, wild turkey, and many other iconic North American game animals.

In a time of stark political polarization, RAWA appears to be one of the few causes able to unite both Democrats and Republicans: the bill passed the U.S. House of Representatives with bipartisan support in June and has been introduced in the U.S. Senate, where it is expected to be voted on this month.

The survey conducted by Responsive Management marks one of the first major assessments of public opinion on RAWA. In the survey, respondents were first read a description of the legislation that explained the purpose of the bill and the funding source; they were then asked whether they supported or opposed the Recovering America’s Wildlife Act. A total of 70 percent of adult U.S. residents expressed support for RAWA (including 42 percent who indicated strong support), compared to only 5 percent who oppose the measure.

Reflecting the bipartisan support for the bill in the House, the survey found strong support for RAWA across the political spectrum, with majorities of Democrats (82 percent), Republicans (64 percent), and independents (64 percent) supporting the legislation. 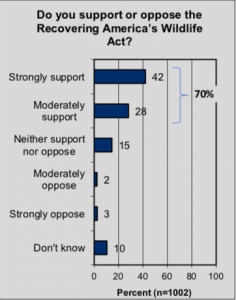 Furthermore, the survey identified majority support for RAWA among every major demographic group examined in the research, including males and females; younger, middle-aged, and older residents; those of higher and lower education levels; and those in urban, suburban, and rural areas. RAWA was also supported by diverse outdoor recreationists, including 80 percent of wildlife viewers, 78 percent of anglers, 77 percent of birdwatchers, and 70 percent of hunters.

“I was initially surprised at how high the support for RAWA was in the survey,” said Responsive Management Executive Director Mark Damian Duda. “But the truth is that, over three decades of survey research, we’ve seen that Americans consistently back conservation issues. In fact, in the last several elections, upwards of 75 percent of the ballot measures on wildlife, habitat, and green issues around the country pass. When these issues are presented directly to the people, Americans tend to vote consistently in favor of conservation.”

“Something we understand well as wildlife managers and representatives of state agencies is that wildlife conservation transcends party politics, and this polling demonstrates that,” said Ron Regan, Executive Director of the Association of Fish & Wildlife Agencies. “The Recovering America’s Wildlife Act is the single most impactful wildlife conservation bill in a generation.”

The scientific, probability-based survey was conducted August 25-28 and entailed a random sample of 1,002 United States residents ages 18 and older. The survey was fielded through a combination of telephone (including landline and cellular numbers) and online interviews. (The use of supplemental online interviews allowed for greater representation of younger residents, as research indicates that younger people are less likely to complete a telephone survey than they are to complete a survey online.) For the entire sample of adult U.S. residents, the sampling error is at most plus or minus 3.1 percentage points.