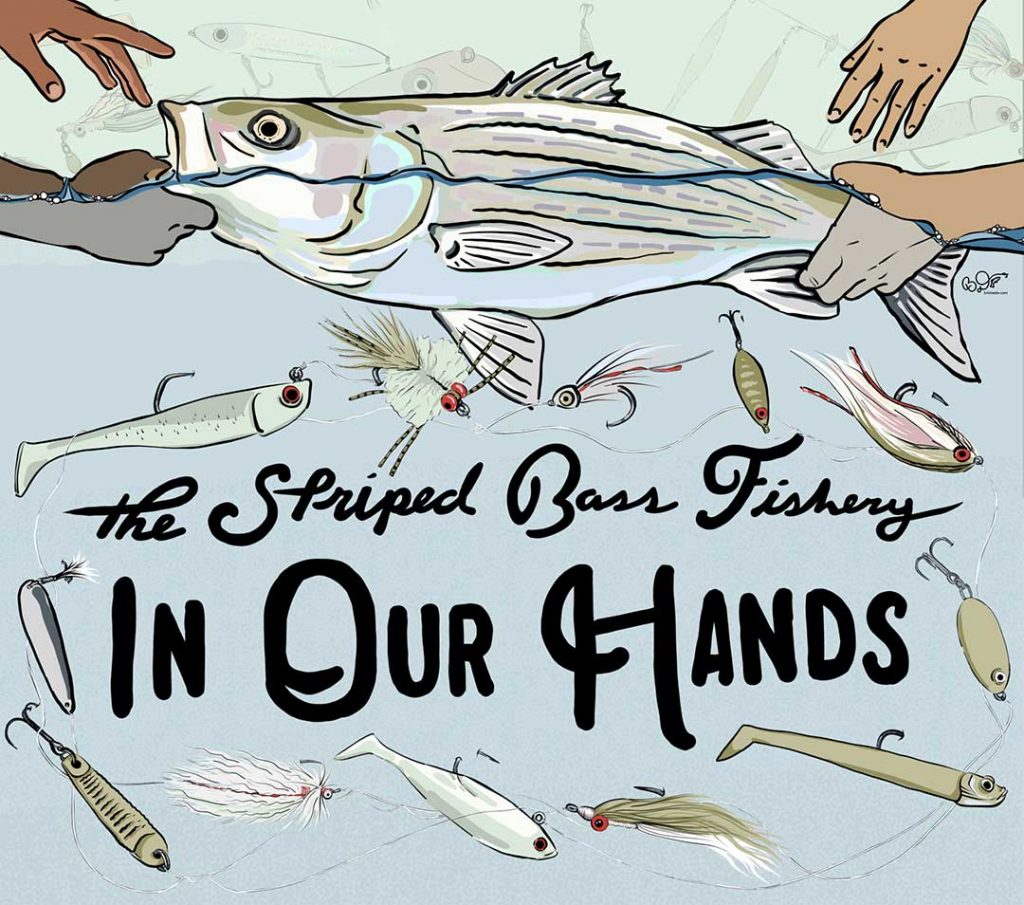 One of the redeemable qualities about striped bass is that, when they are plentiful, these fish are incredibly accessible.  We fish for them on foot in downtown Boston, from quiet beaches in Rhode Island, in the brackish water of the Chesapeake Bay, and by boat all the way from North Carolina to Maine.  In fact, data from 2017 shows that almost 18 million angler fishing trips were taken in pursuit of stripers.  That impressive number represents 9% of the total angler fishing trips taken across the entire country (NOAA – Source).

If you’re a striped bass angler, you likely know that the population is in trouble.  Striper populations are currently at a 25 year low and the age structure is out of whack.  If our fisheries managers at the Atlantic States Marine Fisheries Commission (ASMFC) don’t correct the trajectory, we all stand to lose this iconic resource.  ASMFC is in the midst of trying to adjust their own mismanagement of the striped bass stock and rebuild the population through a new plan.  Anglers aren’t particularly confident in ASMFC, and with good reason, the commission’s track record is less than stellar.  I share this context to simply set the stage.  I’ll halt right there and shift gears.  This is not an article of doom and gloom but rather, one of hope, and a reminder that:

STRIPED BASS ARE IN OUR HANDS

This year, the angling community will have millions and millions of chances to care for this species.  Anglers pursue striped bass in myriad ways with a number of goals in mind:  some hope to feed their families, some go fishing to simply catch-and-release, and some to make money in the commercial fishery.  Regardless of how you access and utilize the fishery, it is your right to legally operate within the regulations that your state defines.

Whether you catch-and-release or catch-and-keep, commercially or recreationally, releasing fish is something that all anglers do.  We are all united by the perfect moments of getting a striped bass to hand, regardless of our ambition and regardless if that fish goes to the cooler or back to the ocean.

According to the most recent Striped Bass Stock Assessment released in 2019, the number of stripers that unintentionally die from catch-and-release angling actually exceeds the number of bass that are recreationally harvested.  To simply break that down, recreational anglers kill more fish by catching and releasing them than by actually intentionally killing them for food.  That fact might come as a surprise to many but ASMFC estimates that 9% of the fish that are caught-and-released throughout the striped bass season die.  These stripers that die from catch-and-release might be a fish gill hooked in Maine’s cold june water, or a gut hooked striper in New Jersey during the fall migration, or a Maryland bass that just couldn’t survive a summer release in a low oxygen environment, or even a bass that was simply held out of water longer than it could handle after a strenuous fight.

When we slow down and think about each encounter during the season, it becomes clear that careful handling during every single interaction is not only vital to that individual fish’s survival but to the entire future of the striped bass population.  An encounter with a 14” schoolie and it’s safe release potentially solidifies a future 40” warrior bass that crushes menhaden, eats surface plugs, lives for live mackerel, slurps chunk baits and inhales a well placed fly. ASMFC’s most recent stock assessment, estimated that approximately 3.4 million striped bass died from the practice of catch-and-release, the direct result of our handling and angling practices. That’s an enormous number and one that we have control of through our individual behaviors. Yes, we are individual anglers but together we are the users and stewards of this resource and have an enormous impact.

Keep Fish Wet is an organization focused on helping recreational anglers improve the outcome for each fish they release.  They do this by taking the best available science on how fish respond to capture and handling, and translate the research into simple techniques that anglers can use to ensure that released fish survive and are healthy.  When doing the math, Sascha Clark Danylchuk, Executive Director of Keep Fish Wet, reminds us that if we decrease release mortality by just one percent (something that is very doable using best practices), then over 250,000 more stripers would remain in the fishery.  Those fish that have been given the best chance at survival will live on to support recovering stocks and be caught again another day.  Whether you fish from a center console, the beach, a rocky shoreline, a skiff, or a downtown piece of city concrete, these principles will help to make sure that your catch is released safely.

We have high hopes that ASMFC sets the management plan for striped bass on a course to rapid recovery, but in the meantime let’s take this fishery in our own hands and safeguard that each fish we release swims off strong and healthy because:

STRIPED BASS ARE IN OUR HANDS

Below are the best practices you can use to create better outcomes for each striped bass you release.

The actions that will make the most difference to the survival and health of the striped bass you put back – whether because of regulations or voluntarily.  Regardless, we all catch-and-release.

Actions that help you employ the Principles