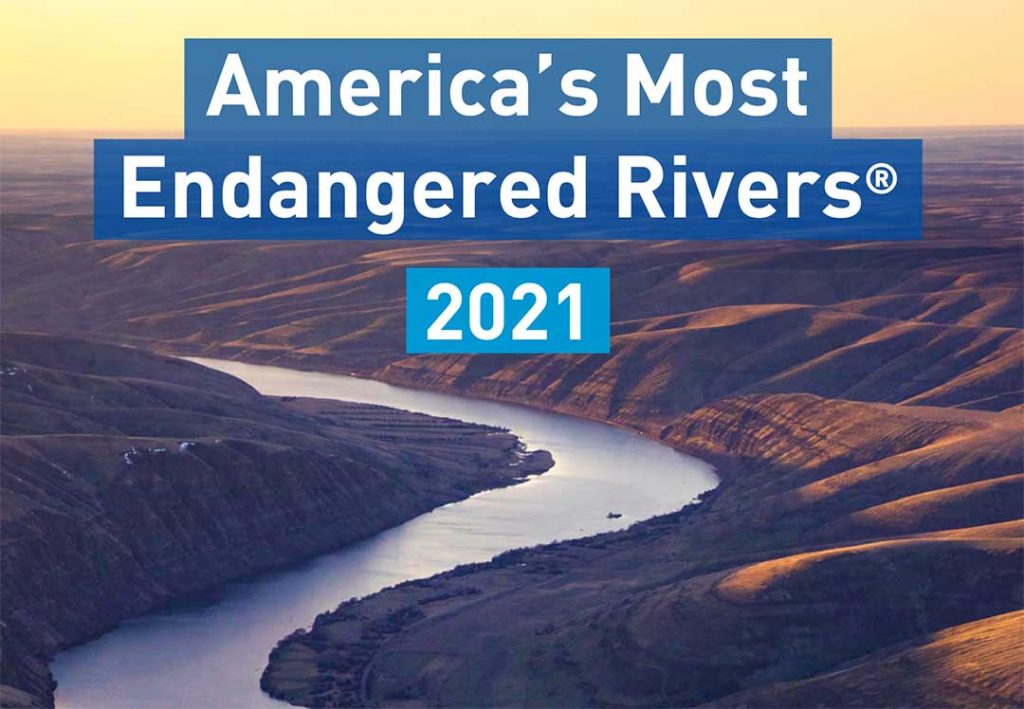 “Rivers are among the most degraded ecosystems on the planet, and threats to rivers are threats to human health, safety and survival,” said Tom Kiernan, President and CEO of American Rivers. “If we want a future of clean water and healthy rivers everywhere, for everyone, we must prioritize environmental justice.”

Rarely has a river been in such need of bold, swift action than the Pacific Northwest’s Snake River, America’s Most Endangered River of 2021. Once the largest salmon producer in the Columbia River Basin, today Snake River salmon runs are at the brink of extinction. The loss of salmon is an existential threat to Northwest tribes who depend on the fish for their cultures and identities.

Scientists say that without removal of the four dams on the lower Snake to restore a free-flowing river and improve access to high-quality spawning habitat in Idaho, the salmon face extinction. Congressman Mike Simpson (R-ID) has proposed a $33.5 billion framework to remove the dams, recover salmon, and revitalize the region’s infrastructure and economy.

“Salmon are critical to the cultural lifeways of Columbia-Snake River Basin tribes, like my own people of the Confederated Tribes of Warm Springs, Oregon, and are integral to regional identity, economies, and even the orcas and the Puget Sound,” said Alyssa Macy, CEO of Washington Environmental Council / Washington Conservation Voters. “Removal of the four dams is a once-in-a-lifetime opportunity for salmon restoration that will benefit Tribal Nations, local economies, environmental ecosystems, and the Southern Resident Orca population for generations to come.”

“On the Snake River, we have an opportunity for the greatest river restoration effort the world has ever seen,” said Kiernan. “A well-crafted, comprehensive solution would be a down payment on a future of abundance and prosperity in the Pacific Northwest. It would benefit the nation as a whole by saving iconic salmon and orcas, bolstering clean energy and strengthening the economy of one of the most dynamic regions in the country.”

In its 36th year, America’s Most Endangered Rivers® is one of the most well-known campaigns in the conservation movement. It shines a national spotlight on rivers whose fates hang in the balance, elevates local advocacy efforts, and mobilizes the public to make a positive difference. American Rivers chooses rivers for the list based on the following criteria: 1) the magnitude of the threat, 2) the significance of the river to people and nature and 3) a critical decision-point in the coming year. The campaign has been instrumental in saving rivers from pollution, dams and other threats.

AMERICA’S MOST ENDANGERED RIVERS® OF 2021

American Rivers believes a future of clean water and healthy rivers for everyone, everywhere is essential. Since 1973, we have protected wild rivers, restored damaged rivers and conserved clean water for people and nature. With headquarters in Washington, D.C., and 300,000 supporters, members and volunteers across the country, we are the most trusted and influential river conservation organization in the United States, delivering solutions for a better future. Because life needs rivers.