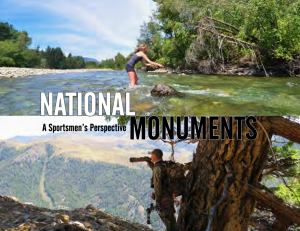 MISSOULA, Mont. – Protections for millions of acres of public lands wildlife habitat could be restored to two Southwestern national monuments as a result of a review initiated by the Biden administration this week, reversing controversial changes made during the last administration and restoring integrity to the federal Antiquities Act.

The borders of Grand Staircase National Monument and Bears Ears National Monuments in Utah were dramatically reduced by President Trump in 2017, opening development on lands that support wildlife populations valued by sportsmen and women and are sacred to tribes in the region.

Backcountry Hunters & Anglers supports judicious use of the federal Antiquities Act as a means to permanently conserve important large landscapes, and BHA members and supporters have rallied behind America’s national monuments system, emphasizing their ability to sustain the places and traditional uses relied upon by hunters, anglers and others.

“For more than a century, the Antiquities Act has proven to be one of our most effective tools for permanently conserving critical fish and wildlife habitat and public hunting and fishing opportunities,” said BHA President and CEO Land Tawney. “Conceived by the Boone & Crockett Club and signed into law by Theodore Roosevelt, the Act has been used by 16 presidents – eight Republicans and eight Democrats – to safeguard millions of acres of exceptional public lands and waters.

“We’re glad that President Biden has chosen to restore the integrity of the Antiquities Act,” Tawney continued. “His actions will reverse the unprecedented assault that has been levied against this bedrock conservation law. We hope that future presidents will follow suit in using it wisely and vigorously defending it.”

In 2017, BHA mapped hunting opportunities on six Western national monuments being considered by the Trump administration for modification, reduction or elimination.

As outlined in this report released by BHA and a consortium of outdoor groups and businesses, the designation of national monuments can be a critical tool to safeguard important fish and wildlife habitat while maintaining traditional hunting and fishing access.