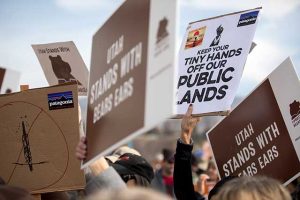 In a time of growing polarization, there is one thing a majority of Americans still share and agree on: our 640 million acres of public lands should be protected. These wild places are intrinsic to our national identity, offer a solution to mitigate the climate crisis, provide habitat to animals large and small, and offer the most magnificent landscapes in the world. Through the work of Montana investigative journalist Hal Herring, Public Trust focuses on three land-based conflicts—the slashing of the Bears Ears National Monument in Utah; the potential permanent destruction of the Boundary Waters Canoe Area Wilderness in Minnesota; and the de facto sale of one of the last wild places in America, the Arctic National Wildlife Refuge. The film makes a clear case for protecting our public lands and how the extractive industries, driven by greed and profit, are trying to rob us and future generations of our shared American experience and heritage.

The world premiere screenings for Public Trust will be held on Presidents’ Day, Monday, February 17, at 6:00 p.m. at The Wilma and Tuesday, February 18, at 8:00 p.m. at Hell Gate Elks Lodge. Since it was signed into law over 100 years ago by President Teddy Roosevelt, the Antiquities Act has been used to protect public lands and waters by every president except three—Richard Nixon, Ronald Reagan and George H.W. Bush. And despite increased polarization on nearly every issue, there is widespread bipartisan support for our public lands and waters. According to a 2019 Conservation in the West poll, more than two-thirds of voters in Western states think Congress should emphasize conservation on public lands.
“Our country is fortunate to have millions of acres of public lands, including national parks, monuments, wildlife refuges and wilderness areas set aside for future generations,” said executive producer Robert Redford. “Sadly, these lands that belong to you and me are under unprecedented threats from the greed of big corporations, which are eager to weaken restrictions in the pursuit of profits. Many of our current politicians are also to blame. Public Trust tells the story of citizens who are fighting back. It’s a much-needed wake-up call for all of us who want to preserve our unique and wild cultural heritage.“
Patagonia founder Yvon Chouinard said, “Imagine our country without our public lands—without protected parks and streams, wilderness and other wild places. If the oil companies and this administration continue to choose rigs over your kids’ future, we will lose what’s left of our shared 640 million acres. Public Trust is a must see.”

Using extensive research and interviews with tribal leaders, government whistleblowers, journalists and historians, Public Trust follows the people who are fighting back against the destruction of public lands and the forces they are up against.Along the way, we meet heroic activists who are defending the land from corrupt interests, including Angelo Baca, a Diné (Navajo) filmmaker, scholar, and activist working to protect Bears Ears; Bernadette Demientieff, a mother, grandmother and executive director of the Gwich’in Steering Committee, an organization formed to protect the Arctic National Wildlife Refuge; and Spencer Shaver, a fierce defender of the Boundary Waters Canoe Area Wilderness, where he grew up hunting and fishing. These stories educate us about the past and speak to the uncertain future of our public lands.