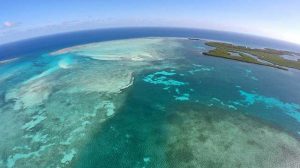 Turneffe Atoll Trust, a registered non-governmental organization focused on environmental conservation, has acquired some 17,000 acres of National Land at Belize’s Turneffe Atoll to be conserved in perpetuity through establishment of the Turneffe Land Trust, announced Craig Hayes, Board Chairman of Turneffe Atoll Trust.

As Trustee, Turneffe Atoll Trust is charged with safeguarding this property and maintaining its biological and socio-economic advantages for the beneficial owners of the Trust, the Government and People of Belize.

While private land at Turneffe will not be directly affected, the Land Trust will effectively prohibit development of a large portion of the atoll. The land acquisition ensures protection of the atoll’s fragile mangroves and wetlands including essential habitats for fish, birds and other wildlife, including the endangered West Indian Manatee and the threatened American Crocodile.

Established in 2002, Turneffe Atoll Trust (TAT) has advocated for the protection and sustainable management of Turneffe Atoll and similar coastal marine habitats. As TAT Executive Director Alex Anderson, notes, “the establishment of a Land Trust has been a TAT goal for more than a decade.”

In announcing the historic agreement, Hayes commended the efforts of Belizean Ministers Omar Figueroa and Hugo Patt for their “wisdom and foresight” in moving this project forward, noting, “This effort would not have been possible without their leadership.”

Approximately 30 miles off the mainland, Turneffe Atoll is the largest and most biologically diverse atoll in the Caribbean. Its environmental assets provide major economic benefits for Belize, estimated at more than 500 million dollars annually. Economic benefits for Belize include the atoll’s protection of Central Belize, including Belize City, from storm damage, its blue carbon value, its contribution as a major commercial fishery and its substantial tourism value.

Funds for the project were raised by Turneffe Atoll Trust through donations from individuals, foundations and Turneffe Flats Resort.