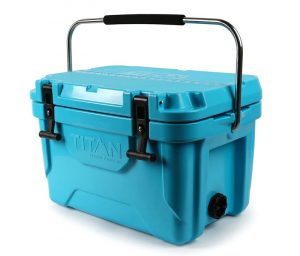 The roto molded cooler craze now takes many forms with many players. For me, picking one over the others boils down to a few factors—price, better (or at least equal) ice retention that should be days not hours, and functional design. This Titan ice chest from Arctic Zone checks off all three boxes. At $150, it’s 50 bucks less than the Yeti Roadie. I stuck a block of ice in each, and the ice lasted exactly the same (about 3 days on a sunny deck in Colorado in fall). I like the larger drain plug on the Titan, and the latches are fine. The real kicker, though, is that this cooler is treated with Microban an antimicrobial product that makes it stain and odor resistant, and easy to clean. How many times have you had a can of soda leak, or thought you cleaned out the half-eaten ham sandwich, only to realize the next time you were going fishing you didn’t? I’ve had two expensive coolers die slow, stinky, bleach-laden deaths for those reasons, and the Titan doesn’t seem doomed to the same fate. I like the 20-quart size for the back of a vehicle or hauling a picnic lunch on the boat, but it’s not large enough to be a full-on boat cooler. For that, you’d want to spend an extra $95 and get the 55-quart version—still a crud-resistant bargain compared to many other roto molds.