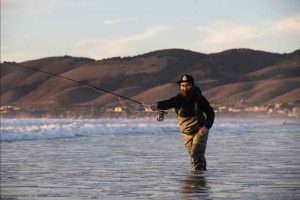 Orvis is pleased to announce the winner of the 2019 Breaking Barriers Award, Tracy Nguyen-Chung, the founder of Brown Folks Fishing (BFF), a national angler-led initiative that cultivates access, conservation efforts, and community for Black, Indigenous, and people of color in the sport of fishing. Nguyen-Chung and fellow Brown Folks Fishing ambassadors came together on Fri., April 26, 2019, at the Orvis Guide Rendezvous to accept the award.

“This award is given to an individual who has gone above and beyond to bring new people into the sport of fly fishing,” remarked Simon Perkins, Orvis COO, who presented the award. “Their mission to build capacity, access, resources, visibility and a solid community for anglers of color makes the sport stronger and we are honored to be working with them.”

Nguyen-Chung remembers learning how to fish from her father, a Vietnamese refugee who grew up fishing. She caught her first rainbow trout at the age of six but stopped when she entered her teens. It wasn’t until she moved from Portland, Oregon, to Los Angeles, California, that she picked the sport back up. The deeper she became involved, the more she recognized the need to diversify the face of fishing.

“Fishing was a way for my father to connect back to a homeland that, for a long time, he didn’t know if he could see again. Through him, I’ve come to understand that fishing has always had deep and complex roots in our communities. We tell stories because we are aware of the complexities and power dynamics that impact which storytellers and audiences we most regularly see and validate,” stated Nguyen-Chung.

Since its founding in 2018, the BFF team has created a collective following of more than 30,000 on Instagram alone. Their goal is to use media including photography, documentary film, and social media to build a community and change how individuals are represented in the sport. Conservation is also a key focus for BFF, which will be launching a fellowship to support new anglers in creating local projects at the intersection of fishing and conservation.

“Getting more diverse folks together and on the water is really a gateway to conservation,” added Nguyen-Chung. “The more people we can get out on the water the more power we’ll have to protect it.”

Orvis created the Breaking Barriers Award in 2015 with the goal of celebrating individuals who have gone above and beyond to break down barriers and introduce new audiences to the sport of fly fishing. Past winners include Whitney Milhoan from Casting for Recovery (2018), Jess Westbrook from The Mayfly Project (2017), Nelli Williams from Trout Unlimited and Bristol Bay Fly Fishing and Guide Academy (2016), Chad Brown from Soul River Runs Deep (2015) and Lori-Ann Murphy from Reel Women Fly Fishing (2015). Orvis will soon be accepting nominations for 2020 and is looking for those who are engaging new anglers, feeding the sport and approaching things maybe just a bit differently.