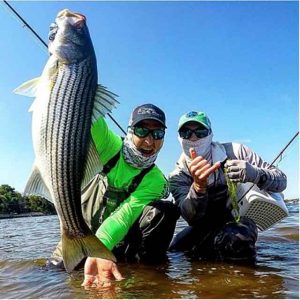 It was another banner year kicking off the striped bass fly fishing season on Cape Cod. Now in its 8th year, the Cheeky Schoolie Tournament is the largest fly fishing tournament in the world.

This year’s event touted over 450 participants descending on Cape Cod for an action packed weekend hosted by Boston based fly reel manufacturing company Cheeky Fishing. While many participants are there to duke it out for the title, others attend simply for the good times, great people, and of course, the party!

This year’s Cheeky Schoolie Tournament began on Friday night with the Costa Del Mar Kick Off Party. Food, music and beverages were enjoyed by all, and some pretty epic prizes were handed out as well. Sunburned faces were prevalent, as many participants had spent the days leading up to the event pre-fishing. Abbie Schuster, Cheeky Ambassador and owner of Kismet Outfitters, hosted the 3rd Annual Women’s Only Schoolie Tournament Meetup before the kickoff party. Close to 30 women attended and partook in casting lessons, knot tying, and tournament strategy discussion.

6:00AM the next morning came quickly. The sun rose over the West Dennis Beach parking lot as Cheeky CEO Ted Upton summited the tourney truck to begin the Captain’s Meeting. A brief discussion of scoring and rules ensued, and the horn was sounded. With that, hundreds of cars rolled out of the parking lot and the 8th annual Cheeky Schoolie Tournament was underway.

For anyone following the tournament’s official hashtag, #CheekySchoolieTourney, it became clear early in the day that the bite was hot. Blues skies and warm temps didn’t hurt either. When all was said and done, 9,531 inches of striped bass were caught and released during the one day competition.

By 2:30pm the scores were in and participants were gathered at Swan River Restaurant for the awards ceremony, enjoying cold ones provided by Oskar Blues Brewery. Team Jones took the title with 105.0”, followed closely by Team Deceiver in second place with 103.5” and Team Salty Beards with 103.0”. The big fish of the day checked in at 32.75”, caught by Team All Washed Up. A full leaderboard can be found by clicking here. After the podium finishers received their prizes, over $20,000 in gear was raffled off to the participants, including a particularly impressive mountain of Yeti Coolers.

While the prizes were impressive, there’s no doubt the most memorable moment of the tournament was the presentation of a $10,000 donation check to Stripers Forever, the tournament’s nonprofit striped bass conservation partner. The donation was made possible by all participants in attendance, as well as the generosity of the event’s sponsors. Representatives from the American Fly Fishing Trade Association, Sight Line Provisions, Patagonia, and Cheeky Fishing were all on hand to present the check.

The 2019 Cheeky Schoolie Tournament was made possible by all its participants as well as its fantastic sponsors. At the end of the day, giving back to the precious striped bass resource we all cherish is what it’s all about. Congratulations to all involved, and we’ll see you in 2020!