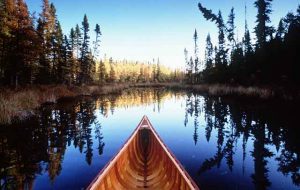 Backcountry Hunters & Anglers members sharply criticized an administration decision to renew controversial mineral leases in the Boundary Waters watershed in Minnesota, a fish and wildlife-rich region treasured by sportsmen and women and relied upon by businesses and communities throughout the state.

Interior Secretary David Bernhardt announced the decision to enable the advancement of the proposed Twin Metals copper-nickel mine near the Boundary Waters Canoe Area Wilderness in the face of vociferous opposition by thousands of citizens, who have repeatedly advocated for the area’s conservation. The administration’s announcement reverses a popular 2016 decision to withdraw the leases and halt development of the mine.

“We’re deeply disappointed by the administration’s announcement,” said BHA President and CEO Land Tawney. “The decision to abandon natural resources management that is guided by the best available science is very unfortunate. It not only threatens the dozens of communities and businesses that rely on the region economically; it also jeopardizes the fish and wildlife habitat, outdoor opportunities and clean drinking water that the Boundary Waters has provided families for generations.

“Secretary Bernhardt has chosen to ignore the thousands upon thousands of Minnesotans and others who have repeatedly spoken up in support of America’s No. 1 most visited wilderness area,” Tawney stated.

“The Boundary Waters forms a central part of our identity as Minnesotans,” said Hebeisen, who lives in Lake City. “Generations of families visit this vast wilderness to chase whitetails and grouse, to cast lines for northern pike and walleye – and to feed our souls with the solace and adventure that the Boundary Waters provides. Today we stand united in support of conserving this place of respite and grandeur, and together we urge the Trump administration to abandon its fool’s errand that would irreparably harm this one-of-a-kind American treasure.”

The BWCAW encompasses more than 1 million acres of pristine fresh water and forests and provides opportunities to hunt, fish, canoe, hike and camp that have been enjoyed by generations of public lands users. BHA members have joined with Sportsmen for the Boundary Waters and others to take action in support of the region’s long-term conservation.