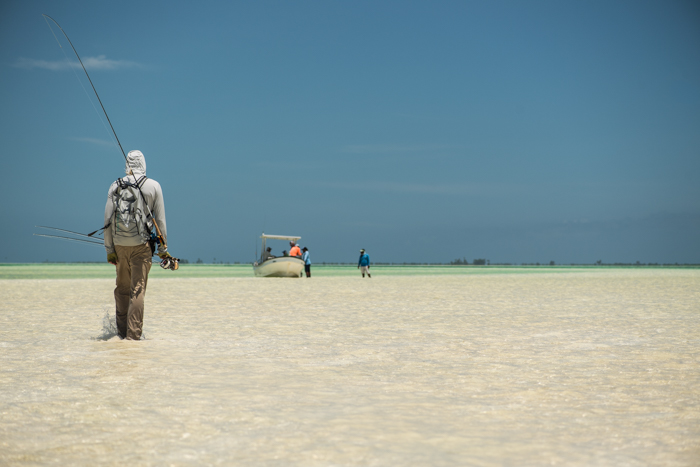 A few weeks ago I was lucky enough to host a trip in conjunction with my local Fly Shop (Front Range Anglers) to Christmas Island in the middle of the Pacific Ocean. It was an incredible trip with outstanding fishing, incredible sights and plenty of opportunity to test a multitude of new gear for the salt water, and travel side of things. I was lucky enough to stick a sizable GT and added 14 other species to my bucket. Here’s some of what I liked…

The program in Christmas is fairly simple. You grab a fishing buddy for the day, get on the boat, meet your guide and get dropped off on some of the most expansive flats you’ve ever seen wandering around with two rods almost every day. GT’s are on the menu, but you’re really picking off other species until that quarry slides up onto the flats. 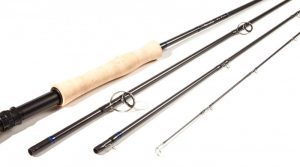 My buggy whips of choice were an 8-wt and 11-wt, both were Scott Meridian rods and both were a total pleasure to cast all week. I feel like the Meridian held up amazingly well component wise being submerged half the day in salt and was just the tool for the job with its quick recovery time to accurately get on target in an environment where speed was essential. MSRP $865 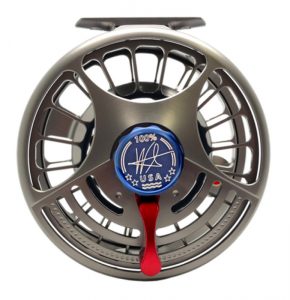 My reels on this trip were relative newcomer in the fly world and ICAST 2018 winner for best fly reel, Seigler Reels. I paired their BF model MSRP $1500 with my 11 weight and MF model MSRP $1000 with the 8 wt. I must say I was intrigued by Seigler’s design philosophy with utilizes a drag knob and a lever that is best described as what is used in the off-shore conventional world. Basically you set your drag on the knob and then can adjust in single clicks with the lever to a pre-set level – very quickly. What I wasn’t prepared for what how absolutely game changing this is for large fast and strong fish. Besides being one of the easiest and quickest reels I’ve ever been able to adjust the drag on the real advantage in my eyes was how quickly I could switch back to a drag setting where stripping was efficient. What I mean by this is that if I was casting for GT’s my drag was set damn tight, so tight that stripping excess line off the reel for longer shots was tough if you needed to do it quickly. With the Seigler though, you simply flick that lever to the top and BAM you’re back to trout strength drag and ripping off twenty extra feet of line quickly was no problem. One flick to the lever (a 1/4th second motion) and you’re back at GT strength. Bad ass, if I do say so my self. The start-up inertia and drag is butter smooth and dead silent and these things look drop dead gorgeous. The reel knob is WAY oversized, which was kinda a head slapper for me. All salt water knobs should be this big. They are 100% made in the USA and took a pretty healthy beating from me with no signs of wear. The only drawbacks I would mention if I HAD to pick something is A. they are mucho expensive, but what’d you expect? And B. the tolerances of space between spool and cage seemed large. That’d said I never had a problem with line slipping through, not once. I was using big lines though… All in all one of the more exceptional reels I’ve had the pleasure of using in a long time. Major overkill for trout, but absolutely game changing for big open-water fish. 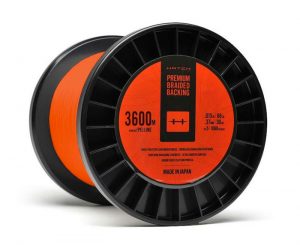 Both reels were loaded up with that fancy braided Hatch backing. That stuff is expensive, but dang is it nice and especially good for this type of fishing. It’s got the feel of Dacron and is as thin and strong as Gel Spun in an 8 braid line. It’s stronger and ighter than almost everyone else’s offerings. I even brought a large conventional reel spooled up with the stuff as “braid”. It worked like a charm. MSRP – 3,600 meters $840 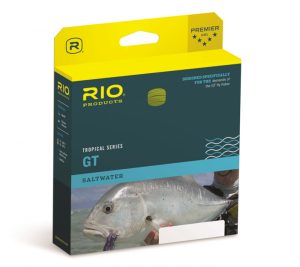 Speaking of lines, I paired my 11weight with a RIO Tropical GT line in a 400GR and 475GR weights and both were fantastic. These things are built with insanely strong cores and aggressive tapers that make throwing big flies quickly, much easier. I stupidly got one wrapped around a boat prop (like 20 feet) and while it did slice the hard outer coating, it did not cut the core. These things are tough! MSRP $99.99 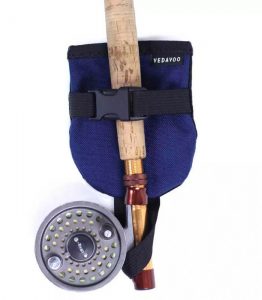 Not being totally adept at walking around with two fairly large rods all day I randomly grabbed Vedavoo’s Rod Holster that was sitting a pile of swag at my house hours before I left on a whim. Admittedly I had never used it before. It worked flawlessly even with that big ole Seigler reel and 11wt. strapped in. I even put both my rods in it multiple times to pull out the camera and take photos. You need to position it close to your pant pocket to utilize a little extra gripping power, but dang this thing worked well. I’m now thinking about all the possibilities at home in Colorado walk/wading with much smaller rods. It’s gonna be a fun summer… MSRP $24.95 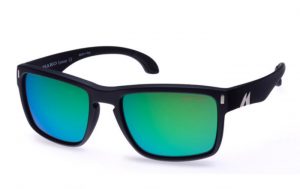 While I’ll never leave my tried and true Smith – Guide’s Choice Chroma Pop Glass shades at home and these were on my face most of the time on the island I also brought a pair of Mako Polarized aptly named GT frames in a glass lens with me. Let me tell you folks this company is legit. As a photographer I’m pretty bitchy about what sits in from of my eyes and these are some of the nicest glass lenses I’ve used in a while. Easily holding up to Smith or Costa in terms of quality. I’m wearing these around quite a bit at home now and have taken them on two trips with great success and no scratching. My only beef would be that they need to add hinges on the ear stems. Oh and retailers did I mention they are looking to expand that footprint? Look em up.  MSRP $258.99 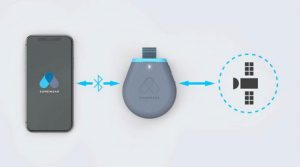 As you can imagine connecting to home via phone or email was somewhat tricky on Christmas Island. While I had a SAT phone for emergencies I also used a new satellite hot spot from Somewear Labs for bluetooth texting from my phone. It was easy-peasy to set up with a downloadable app and very straightforward directions. It’s small, lightweight and waterproof and utilizes all your contacts already in your phone. I actually set it out on a chair on the beach one night before a downpour and sat like 30 feet away dry as a bone texting my wife. The unit functions as a standalone SOS beacon and still drops location pins (after programmed to do so) without cell phone pairing. It also has the most affordable data package on the market at $450 for unit + 1yr data. MSRP $349.99 – unit only. 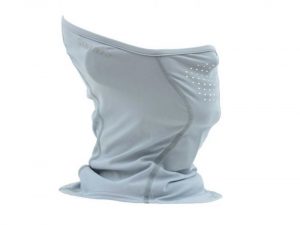 I hate sunscreen and have vacillated back and forth with oversized sun hoodies and other face protection for a long time. This was my first extended use of the Simms Solarflex Sun gator. The thing is money! It’s UPF 50, is cut ergonomically to fit your face and head (rather than just a tube), has laser cut breathing holes which for me was a HUGE bonus and feels cooler when wet. Simms claims a 30% lower surface temperature. It also works well with hats and dries very fast. MSRP $29.95 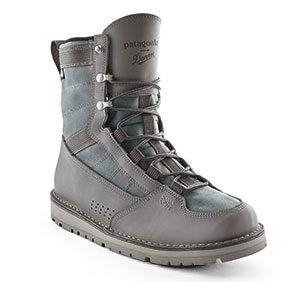 Lastly I’ve been testing out the new Patagonia River Salt boot collab with Danner. I took them for a week last fall to Russia to break them in and fell in love with them on the flats of Christmas Island. They are bomber, very lightweight and incredibly comfortable. Plus for some reason they seem to elicit complements whenever I put them on for looks. If you’re into that kinda thing. We’ll keep you appraised of long term use as the year goes on. Read more about these boots here. MSRP $449