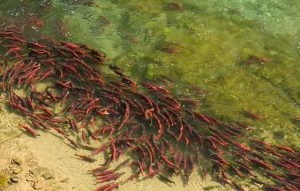 From Save Bristol Bay:

The U.S. Army Corps of Engineers released its Draft Environmental Impact Statement today and we have serious concerns. The DEIS is a government document describing the environmental risks of a proposed project, and is one of the biggest steps toward an agency making a permitting decision.

While we are still digesting the technical materials in the DEIS, immediate problems stand out. The document is riddled with pro-Pebble bias. For instance, when discussing social and economic impacts, the Army Corps focuses on the importance of copper to the global economy over the importance of renewable subsistence resources to Alaskans. The DEIS fails to even address the prospect of a catastrophic tailings dam failure, which is the single-largest danger associated with Pebble. Earthen tailings dams fail all the time. The firm that designed the Pebble dam was responsible for Mount Polley Mine’s dam, which failed in 2014.

The proposed public comment period is completely inadequate. The public needs more than 90 days to review 3,000+ pages of technical information. This is yet another indication the Army Corps is rushing toward approving a mine.

A reasonable DEIS would not have these immediate, glaring issues. It is deeply concerning that the Army Corps appears to favor a mine in this process. That is not their job. This is supposed to be an impartial and scientific process, and at this point it does not appear to be.

Given the failure of the Army Corps to meet its statutory mandate in evaluating this mine, it is time to explore our options for action.

The public comment period opens on March 1. It is crucial for everyone reading this to submit comments to the Army Corps. These comments are the foundation of our efforts to force the government to go back and do the job right.

We need to demand accountability at all levels of government. Sen. Lisa Murkowski has consistently said she wants a robust permitting process that involves Alaskans and addresses their concerns. This DEIS fails to meet that standard and Lisa Murkowski needs to know you care. She holds an important gavel in the Senate and can demand answers from executive agencies that are failing Alaskans.