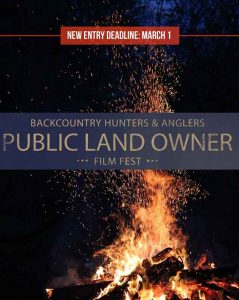 We want to thank all of those who have submitted entries to the 2nd Annual Public Land Owner Film Fest. We know that many of you worked hard to hit today’s deadline. We appreciate those efforts. We also know that many of you have been hard-pressed to get your films completed as you wrap up your hunting seasons. We get the struggle. That’s why we’re announcing a deadline extension! We’ll now be accepting entries to the film fest until March 1st.

Winning entries will be featured at the Public Land Owner Film Fest on the evening of Friday, May 3rd at the 8th Annual North American Rendezvous in Boise. Following Rendezvous, the Public Land Owner Film Fest will be shown by BHA chapters across the continent! Remember, this film fest is open to all public land owners whether they have prior video experience or not. There is no limit to the number of entries you can make, so use this time to create another film if you’ve already submitted! Good luck!