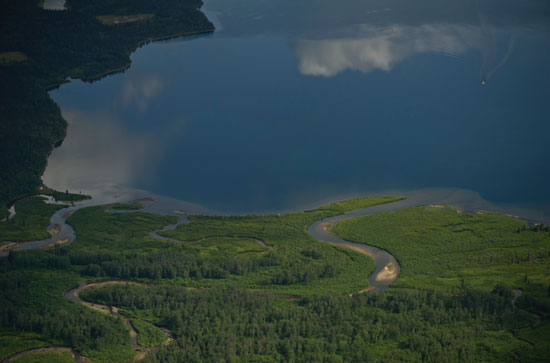 On a sunny day last August, I was fishing a Bristol Bay river with friends visiting from Colorado. They wanted to catch their limits of wild salmon to bring a literal taste of Alaska home with them for Christmas gifts and to enjoy throughout the winter. Already having a freezer full, I just wanted to catch some big rainbows.

“No problem,” our guide said.

Sure enough, 8 hours later my friends’ freezers were stocked, and I’d caught a few of the beefiest, most colorful trout I’d ever laid my eyes upon. It was the best day of my summer, and a wholly average day in Bristol Bay.

When people describe Alaska as the last vestige of thriving wild salmon in North America, what they often mean is the Bristol Bay region is the last vestige of thriving wild salmon. For a state whose reputation often rests on its abundant wild salmon, Bristol Bay was the only region to meet all its escapement goals, including for Chinook, last year and is the only region expected to do so again in 2019.

Meanwhile, the proposed Pebble mine is closer than ever to becoming a reality and threatens to end it all.

Though many lower-48 anglers may assume the ill-conceived mine is dead, the change in political climate over the past few years has breathed new life into the project. Federal regulators are now fast-tracking Clean Water Act authorizations for the mine and plan to issue a final permit as early as next fall, a pace far faster and more abbreviated than ever undertaken for a project of this type or size.

If issued, this permit would authorize the destruction of many miles of salmon streams and thousands of acres of crucial wetlands, and could pave the way for Pebble to begin digging within the next few years and get its foot in the door to turn the Bristol Bay region into an industrial mining district within this decade.

If you’re shaking your head at the perceived hyperbole of that statement, know that Pebble is currently seeking authorization from the state of Alaska to drill new exploratory wells far outside the footprint of what they’ve proposed to federal regulators. While Pebble is telling Alaskans its “new” project is smaller and more environmentally friendly, they’ve already begun planning for future expansion and continue to pitch potential investors on Pebble being the largest mining opportunity in the world. Understand that their CEO signed a settlement agreement with the EPA stating, “EPA may use the Bristol Bay Watershed Assessment without limitation,” and the Bristol Bay Watershed Assessment said in no unclear terms that the proposed Pebble mine would destroy miles of streams and thousands of acres of wetlands, risk untold future spills and water contamination, and will require maintenance and remediation forever. The proposed Pebble mine would risk ruin to the local economy and culture and goes against the will of 90 percent of Alaskans in the region.

This spring, sportsmen and women nationwide have the opportunity and, for those like myself who believe we are merely caretakers during our time on this planet, the responsibility to join a diverse coalition of Alaskans to stand up once again and tell permitting agencies and elected decision-makers ‘no’ to the Pebble mine.

Sportsmen and women nationwide who love Bristol Bay, who one day hope to fish or hunt in Bristol Bay, or who recognize that our last, best wild salmon fishery is simply too special to risk by large scale mining must speak up once again this spring to help stop the proposed Pebble mine.

If you are one of those people, your task is simple: comment using this form to the U.S. Army Corps of Engineers. Then tell your friends, neighbors, and fishing buddies to do the same. Tell them the proposed Pebble mine is not dead, and is closer than ever to being a reality. We’re the ones who have a fighting chance at stopping it.