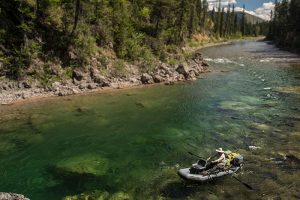 Today, the Theodore Roosevelt Conservation Partnership encouraged House lawmakers to vote in support of reversing a 2017 measure that made it easier to transfer or sell off public lands.

“Considering the benefits they provide to local communities and the nation—including outdoor recreation opportunities, clean water, and abundant wildlife habitat—America’s public lands continue to increase in value,” says Whit Fosburgh, president and CEO of the TRCP. “Congress should not be in the business of finding new ways to get rid of our public lands, and we applaud measures proposed by House lawmakers that recognize public lands are national assets, worthy of conservation.”

In its first day in session, the House of the 116th Congress will consider striking down a rule-change made by a 40-vote margin on January 3, 2017—the first day of the 115th Congress.

This action overturned a requirement, under Congressional Budget Office accounting rules, to offset the cost of any transfer of federal land that generated revenue for the U.S. Treasury, whether through energy extraction, logging, grazing, or other activities. Before 2017, if lawmakers wanted to give federal land to a state or local government or tribe, they would have to account for that loss of revenue.

In other words, for the past two years, public lands—even those producing billions in revenue for the federal government—have had no official value and thus have been vulnerable in terms of possible transfer to the states.

“If this rule is reversed tomorrow, it would indicate that public lands are on firmer footing in the 116th Congress,” says Fosburgh. “We encourage all our lawmakers to restore or create policies that will help keep public lands in the public’s hands.”

Inspired by the legacy of Theodore Roosevelt, the TRCP is a coalition of organizations and grassroots partners working together to preserve the traditions of hunting and fishing. By ensuring access to quality fish and wildlife habitat, we’re also safeguarding the $887 billion that sportsmen and women help contribute to the American economy.