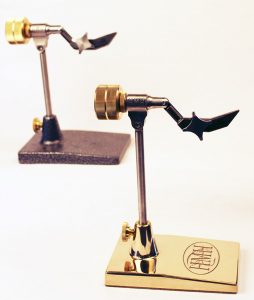 Fly Geek, Bug Junkie, vise collector… if any of these ring a bell, you’re probably aware of and have been waiting for this vise to hit the market. Fight among yourselves while I break down the new HMH TRV for you.

HMH has been making quality vises for over 40 years right here in the USA.  In recent years, the company has called the state of Maine home. HMH quality standards, reputation and professional following have made the HMH brand a staple in most every fly shop coast to coast.

One look at their new TRV (True Rotary Vise) and you’ll recognize the solid HMH tying platform they’re known for.  Then there’s an oversized brass palm wheel, and a Lawrence Waldron-inspired jaw design, the looks of which are no stranger to fly tyers or dressers around the world.  So what’s up with that? Why did HMH get into the rotary vise market?  Was it time for this beloved jaw design to get an overhaul and reintroduction?

They believed it was, and respectfully went at it with inspiration driving their new design. Casting the jaw in two pieces allows for an adjustable knuckle joining the main shaft with the jaw assembly. This important design feature allows the true rotary action to be used across a very large hook range while keeping the shank in plane with the main shaft.  The jaw design is simple but rugged with as few parts as possible making disassembly and assembly simple and fast. One single pin holds the two jaw faces together and only a little tension spring adds to the list of parts. The large 4-spoked knob is threaded through the smaller jaw face, tightening with ease and holding every hook size I put between them. The smallest hooks held their position well with their “precision tip” allowing for plenty of room to work around the hook bend.  Another detail that that I’m sure you’ll appreciate are the three machined hook bend grooves allowing superior holding power to most larger hook models up to 7/0.

That oversized machined palm wheel I mentioned has a delicately textured surface which makes it easy to rotate the jaw in minute increments or free spool while a tensioning lock ring adds the preferred resistance for different tying techniques or individual tying styles.  Rotate the fly for a quick peek of the other side or add legs and eyes without repositioning the hook.

The craftsmanship of the HMH series of vises shines through in their new TRV, staying true to their original idea of making a rugged vise that will last lifetimes. Their pinnacle, the Exhibition vise includes a heavy, beautifully polished brass base boldly displaying the HMH logo, but the glare and light reflection really bothered me while tying. They do offer two other base options, both of which will save you a little pocket change.  This is no cheap vise, folks…you get what you pay for, and this is a valuable tool meant to be used for generations. As a tying tool, it leaves very little to desire, however my main disappointment was the need to buy a bobbin cradle. For a standard vise a bobbin cradle is a nice feature, but it’s a must for True Rotary tying and I was surprised that this vise does not come with one.