California is in the midst of its most deadly and damaging fire season. At least 77 people have died, and over a thousand are still missing. Over 6,700 homes burned, and more than 250,000 people were evacuated. In response, President Trump tweeted: 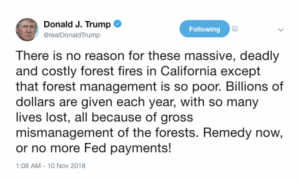 The President’s response is troubling in a number of ways, but one of the biggest problems is the politicization of a complex ecological challenge. Unless we are willing to set aside polemic and examine fire in all its complexity, half-measures will make a bad situation worse.

Wild and native fish depend on healthy watersheds. In many parts of the West, healthy watersheds evolved with frequent low-intensity fires that cleared out brush and recycled nutrients. Fires, when part of a healthy forest regimen, drop trees and woody debris into streams, creating ideal trout and salmon habitat.

Decades of fire suppression and development have turned many forests and grass/scrublands into tinderboxes surrounding suburban neighborhoods. As the California fires demonstrate, when forests and scrublands burn, they threaten human lives and property, clean water, and of course, fish and wildlife habitat.

Perhaps “gross mismanagement of the forests” refers to past practices where loggers took large old trees, and left small skinny ones? Those big trees shaded and cooled the forest floor; the small ones left behind, provide so-called “ladder fuel” for fires to climb. If so, that is an unfair criticism of people trying to meet the socio-economic needs of their communities.

Perhaps the President refers to the practice of forest managers spending half the year talking about the need to allow fire back into landscapes that adapted with frequent fire, and then the other half of the year putting every fire out by 10 a.m.? If so, give forest managers a break, because the moment they allow a fire to get out-of-control, they pay holy hell.

The meaning of the President’s tweet is less important than the imperative that he bring together the people that can solve what ails our forests. Here is what he can do.

The first step is to acknowledge the problem. California is a microcosm of the West. Climate change is causing more frequent and intense fires, floods and drought. Most of the western United States is currently in moderate to exceptional drought. Northern California should be drenched this time of year but has seen scant rain or snow. Warming temperatures and strong winds drive fuels setting the stage for huge wildfires. Ironically, California has been a leader in wildfire suppression, which has only added to the forest fuel load and fire intensity.

A week or so before the TU annual meeting in Redding, Calif., in September 2018. About 1,000 homes were lost in the county because of the Carr fire.

We need to take real steps to curtail greenhouse gas emissions—a root problem— in a way that works for our markets and industries. We can adapt to climate change (to an extent), but slowing its causes takes a long-term commitment to renewable energy, more conservation and less energy use.

Second, we need to make investments in thinning trees and clearing brush in places where forests and communities meet. The Forest Service has developed a landscape-scale plan to land stewardship that can help. But without additional funding little will change. We also need to invest in infrastructure such as bridges to replace culverts that pass neither fish nor floods—because when the floods come after the fires, they not only blow the culverts out, they take out the roads above them.

Third, no matter how often we dredge, ditch or channel it, a river will find its flood plain; so too will a fire-adapted landscape burn. States and municipalities need to actively discourage construction of new homes in areas where fire historically burns, through either strong market disincentives or zoning. If construction is allowed in landscapes with frequent fire, they must be made to employ Firewise construction and maintenance techniques.

Rather than retain the receipts from timber sales in the Treasury, “stewardship contracting” allows the value of the timber to be plowed back into making the forest healthier. These activities include: closing sediment-bleeding roads, treating hazardous fuels, restoring degraded streams, and so on.

Finally, reintroducing fire into fire-dependent communities is complicated and requires support at every level. My friend, Jack Williams, for example, was the forest supervisor on the Rogue Siskiyou National Forest in southwestern Oregon in the early 2000s. In September 2001, as the days were getting shorter and the nights cooler, a lightning strike caused the Craggie Fire to start in the Kalmiopsis Wilderness. Jack reasoned that the fire would burn, in a controlled way, in areas that would eventually burn anyway. Instead, the Forest Service spent $2.2 million to put the Craggie fire out after it burned about 275 acres.

The next year in July, a series of lightning strikes caused the Biscuit fire in about the same area. The Biscuit fire eventually burned 375,000 acres, and was the most expensive fire in the Forest Service’s history. Would allowing the Craggie fire to burn have lessened the severity of the Biscuit fire?

Nobody will ever know the answer to that question. What we do know is that half-truths and half-measures will not solve the problem. Real leadership necessitates bringing all of the interested parties together, acknowledging the effects of climate change, and perhaps most important, practicing restraint.

As Wendell Berry wrote in his 1981 essay, Solving for Pattern:

Restraint – for us, now – above all: the ability to accept and live within limits; to resist changes that are merely novel or fashionable; to resist greed and pride; to resist the temptation to “solve” problems by ignoring them, accepting them as “trade-offs,” or bequeathing them to posterity. A good solution, then, must be in harmony with good character, cultural value, and moral law.

Leadership, collaboration, and restraint are the essential ingredients to fixing what ails our forests.

Chris Wood is the president and CEO of Trout Unlimited. He previously worked for the chief of the U.S. Forest Service and the director of the Bureau of Land Management. This piece was also published in Hatch Magazine.