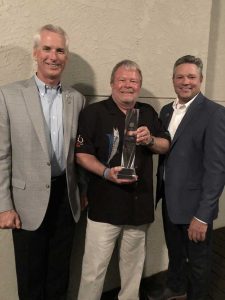 “I am blessed to work with great people and for a great company,” said Bulthuis. “The entire team at Costa Sunglasses shares my passion and commitment to our industry and our sport.”

Bulthuis was honored with the ASA’s most prestigious award, recognizing his extraordinary leadership and lifelong commitment to recreational fishing and the sportfishing industry. Throughout his career, Bulthuis has always been devoted to the sportfishing industry, serving on ASA’s board of directors for eight years, including as Chairman of the Board from 2015 through 2016.

Bulthuis has been with Costa since 2003, where he began his career with the organization as Vice President of Sales. Prior to joining Costa, Bulthuis served as Director of Sales for several brands in the outdoor industry, including Cape Fear Rod Company, Jones and Company and various independent rep groups.

“We are so proud of Dave and how he has served our industry, our sport and our company for more than 15 years,” said Holly Rush, CEO of Costa Sunglasses. “He is truly an icon and has devoted his career and his time to passionately advocating for recreational fishing. We are thrilled he’s been recognized for his dedication and passion—no one deserves it more.”