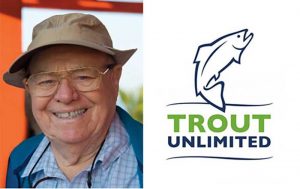 Bonefish & Tarpon Trust, in partnership with Trout Unlimited, is pleased to announce the establishment of the Lefty Kreh Memorial Conservation Fund in memory of legendary angler and instructor Bernard “Lefty” Kreh.
“Lefty made us all better fly casters and did so while keeping a smile on our faces,” said BTT President and Chief Executive Officer Jim McDuffie. “He was instrumental in the growth and development of our organization. As an ambassador of recreational fishing, he inspired generations of anglers to be better stewards of our fisheries.”

Kreh, one of the pre-eminent anglers of his day, was influential across freshwater and saltwater fly-fishing, beginning with paradigm-shifting casting techniques that revolutionized the sport. Through numerous books, articles, videos and public appearances, he became the most acclaimed fly-fishing instructor our sport has ever known, sharing his knowledge with countless anglers around the world.

In addition to writing and teaching, Kreh played many other roles that further enhanced his legend and legacy. He was a former director of the famed Metropolitan Fishing Tournament in South Florida, a recurring cast member of the Buccaneers & Bones television program, creator of the popular “Lefty’s Deceiver” fly, and enshrined in the International Game Fish Association Hall of Fame

“We are honored to help carry on the legacy of Lefty Kreh—one of the greatest angler-conservationists the planet has ever known,” said Chris Wood, President and Chief Executive Officer of Trout Unlimited.

The Lefty Kreh Memorial Conservation Fund will provide support to important conservation projects advanced by BTT and TU, including joint projects by the two organizations that reflect the fishing continuum in most anglers’ lives, from coldwater fisheries to the flats and back again.