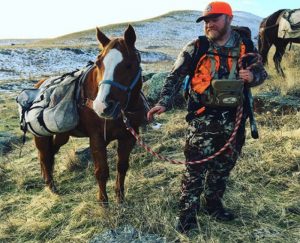 The American Fly Fishing Trade Association presented Backcountry Hunters & Anglers President and CEO Land Tawney with a new industry leadership award, the Jim Range Conservation Leadership Award, at the International Fly Tackle Dealer Show in July. This is the first year the award was given.

Named for the legendary conservationist and passionate sportsman, the Jim Range Conservation Leadership Award is given in recognition of exemplary efforts demonstrating a commitment to AFFTA’s policy protocol: Access to healthy habitat creates recreational opportunity that leads to economic activity. The onetime chief counsel for Sen. Howard Baker, Range was the architect of a number of bedrock U.S. conservation laws, including the Clean Water Act, and co-founder of the Theodore Roosevelt Conservation Partnership.

Tawney’s selection as the 2018 Range Award honoree, said AFFTA President Ben Bulis, was an easy decision for the AFFTA board to make.

“Land has done a remarkable job in rallying a strong, national voice for our wild public lands and waters,” Bulis stated. “Keeping those resources in public hands plays an important role in ensuring our angling heritage and the industry it supports thrive for generations to come.”

Tawney has led the charge at BHA for five years, overseeing the young, active organization through a period of unprecedented growth and engaging a new generation of sportsmen and women in public lands advocacy. A former grassroots coordinator for TRCP and regional representative for NWF, the fifth-generation Montanan and lifelong hunter and angler has been a tireless champion for conservation for his entire professional career.

“To say that it is an honor to receive an award named for one of my mentors is an understatement,” said Tawney. “I’m humbled by this recognition. I thank AFFTA for naming the award after Jim and for honoring me as the first recipient. At BHA I’m lucky to be surrounded by the most amazing staff and volunteers on the planet. We have much yet to do together!”

“The board could not have selected any better candidates to receive these awards,” said Bulis. “The time, energy and passion that these two have dedicated to advocating for our sport and the places we enjoy it is unrivaled. We are proud to recognize the difference that they have made through their tremendous leadership.”

AFFTA is the sole trade organization for the fly fishing industry and advocates for and promotes the industry’s sustained growth.