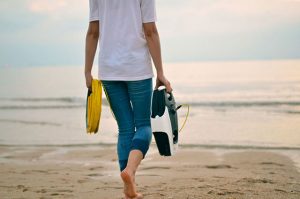 “With Navatics MITO, our goal is to create an underwater drone with the ability to stream high-quality video and maneuver with maximum stability to get the best footage.” said Andreas Widy, CEO of Navatics. “We want to provide this professional level experience, so that anyone from the hobbyist consumer to the professional videographer can experience the marine world without limitation.”

An Underwater Look at Navatics MITO

The perfect companion for any underwater exploration, Navatics MITO is designed to fit airline specifications for carry-on luggage for easy transport, while also being highly maneuverable in any corner of the ocean. Navatics MITO is attached to a floating tether to transmit controls precisely and accurately to the drone deep underwater, where normal wireless controller signals can’t reach. The underwater drone boasts capabilities to capture 4K video at 30 fps and can be used to explore depths of up to 130 ft.

Leveraging Navactics’ advanced active stabilization algorithm, Navatics MITO can “hover” and keep its orientation even in complex underwater currents for up to four hours. Its four thrusters make it highly maneuverable and allow it to tilt up and down to 45-degree angles while maintaining its depth, heading and orientation at speeds of up to two meters per second (around 4 knots). Two 1000 lumen LED lights also give excellent vision and illumination underwater, providing better colors on video and images.

Navatics MITO is piloted by a remote controller which also has a grip for a smartphone. Through the accompanying mobile app available for both iOS and Android, users have flexibility to stream video up to 500 meters (1,640 ft.) away at 1080p resolution. In addition, the app has built-in tools for color correction and the ability to share images and video directly to social media. With Navatics MITO, both professional videographers and novices can capture and share beautiful content in moments.