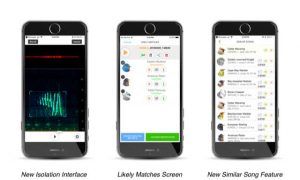 Song Sleuth 2.0 (www.songsleuth.com), the latest iteration of the popular iOS app that turns your device into a powerful birding by ear learning tool and bird song identifier, debuts today on the iTunes Store.

Developed by Wildlife Acoustics, in collaboration with world renowned bird expert and illustrator David Sibley, Song Sleuth 2.0 features all the powerful birding tools of the original with the addition of more birds, a new Similar Song function, thousands of hours of new training data to strengthen classifications, and a new recording isolation interface to help improve identification, among other updates.

The Similar Song function matches a bird song with similar songs from other species.  The function allows users to listen to various species alongside each other, so they can compare and learn the nuances of like sounding bird songs.   The function is accessible in the David Sibley Bird Reference and the Likely Matches screens, so users can work on their bird song knowledge in the off season or while in the field.

“Bird songs are extremely complex, and a very talented American Robin could be mistaken for a Rose-breasted Grosbeak,” said Sherwood Snyder, director of product management at Wildlife Acoustics.  “The new Similar Song function helps you train your ear to know the difference between birds with seemingly identical songs.”

Song Sleuth 2.0 also includes a new recording isolation interface that helps users to hone in the actual song of the bird they want to identify, while filtering out other birds songs or extraneous noises.

“In 2.0 we give users the opportunity to review their recording before running the matching software, so they can ensure that the bird song they want to identify is actually what the app will be analyzing,” added Snyder.

Song Sleuth 2.0 has additional improvements including the ability to sort species alphabetically, by likelihood, or species grouping.  Additionally, users can enter any date range to study the songs and birds likely to be present for any given time of year.  The app now also includes gain control for external microphones and improved voiceover support for sight-impaired users.

Wildlife Acoustics is the leading provider of bioacoustics monitoring systems for scientists, researchers, and government agencies worldwide. Bioacoustics is an emerging field of research that combines biology and acoustic data to gain insights into the natural world.  Wildlife Acoustics was founded by Ian Agranat in 2005 with the invention of an “audio birdsong detective” about the size of a pair of binoculars, known as the original “Song Sleuth.”

In addition to being remarkably more affordable than the original, the Song Sleuth app is both more powerful and accurate.  Thanks to the contributions of Sibley, it is also more elegant. His knowledge and passion for birding have helped create a truly unique learning tool for birders of all levels.

“Song Sleuth is one of many tools that can help identify a bird, but its true benefit is helping people become better birders by familiarizing them with known birdsongs in a logical, familiar way,” said David Sibley.

The built-in David Sibley Bird Reference can be accessed at any time in the app and includes Sibley’s beautiful illustrations and detailed descriptions.  The Reference also includes dynamic range maps and charts developed exclusively for Song Sleuth that show the likelihood of a bird’s presence in the user’s area at any given time of year.

Song Sleuth is available on the App Store for $9.99.  An Android version will be available later this spring.