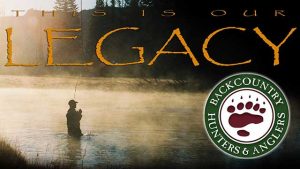 From BHA: Up and coming leaders in Backcountry Hunters & Anglers are getting their hands dirty and volunteering with the U.S. Fish and Wildlife Service on public lands service projects under a new nationwide collaboration between the USFWS and BHA’s college clubs.

BHA club members are embarking upon work-service projects on USFWS-managed lands throughout the United States, working to enhance access, improve habitat and foster a closer engagement by young sportsmen and women to our public lands. From fence pulls and signage projects to hunting access improvement and enhancing vital water sources for big game, these projects underscore BHA’s boots-on-the-ground commitment to public lands by the next generation of conservation stewards.

“The U.S. Fish and Wildlife Service recently celebrated 115 years of existence,” said BHA President and CEO Land Tawney. “BHA is almost a century younger – we were formed around an Oregon campfire in 2004 – but our college club members are showing themselves to be worthy inheritors of this legacy. BHA is honored by the opportunity to work with the trusted public lands stewards at the Fish and Wildlife Service, and we look forward to a long and productive partnership.”

The first project took place in March on the Arapaho National Wildlife Refuge in north-central Colorado, where members of BHA’s Colorado State University Club cut and replanted willow shoots along the Illinois River. Upcoming club projects include trail clearing on Red Rocks Lakes NWR in Montana, hunting and photography blind construction on Hutton Lake NWR in Wyoming and a signage project on Stillwater NWR in Nevada.

“One day of harvesting and planting willow trees along the riparian areas of the Arapaho National Wildlife Refuge means better habitat for the species that make up this ecosystem,” said BHA Colorado State University Club President Matthew Eischens, “and we are more than happy to get our hands dirty and put in some work for that. Our goal is to leave these places better than the way we found them for future generations, and this is a step toward achieving that goal.”

Launched in 2016, BHA’s network of established college clubs close to tripled in 2017, expanding from six to 17. More than 40 new clubs are currently being established at colleges and universities all across the United States.

Trey Curtiss, BHA’s collegiate curriculum and outreach assistant as well as a USFWS fellow, looks forward to developing and expanding the BHA-USFWS partnership.

“During my time building BHA’s first collegiate club while I attended the University of Montana, work-service projects were always a priority for our student members,” said Curtiss. “BHA’s partnership with the Fish and Wildlife Service offers a way to launch BHA’s younger members into a lifetime of conservation engagement with the larger BHA community, other sportsmen’s groups and our land management agencies.”

BHA college club members will be assisting wildlife managers with refuge work projects throughout the spring and summer:

Get details on scheduled events.