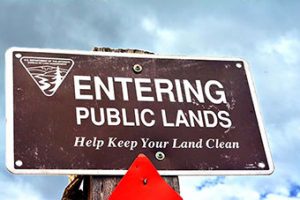 From Backcountry Hunters & Anglers: Western public lands issues seized the spotlight in the U.S. Senate this morning as the Subcommittee on Public Lands, Forests and Mining met to consider a suite of bills, including several with the potential to significantly affect places prized by hunters, anglers and other public lands users. Backcountry Hunters & Anglers members offered pointed responses that singled out positive legislation and roundly criticized measures harmful to public lands and waters.

“We are pleased public land issues have taken center stage and applaud those who are solidifying our outdoor legacy,” said BHA President and CEO Land Tawney. “In particular, we commend Senators Tester and Heinrich for listening to their constituents. I advise Senator Daines to do the same. Sportsmen and women are speaking up, and we expect you to listen.”

The Blackfoot Clearwater Stewardship Act (S. 507), introduced by Sen. Jon Tester of Montana, which would designate as wilderness and promote active forest management, including timber harvesting, on 80,000 publicly owned acres in western Montana that are valuable both recreationally and economically.
“Senator Tester’s bill is a win for backcountry lovers of all types, drawing support from a diverse range of stakeholders, including sportsmen, recreationists, loggers, ranchers and environmentalists,” said Hannah Nikonow, a BHA Montana Region 2 board member from Missoula. “Not only would it conserve valuable native fisheries and wildlife habitat; it also would maintain places that offer backcountry solitude, challenge and adventure – where hunters and anglers are free to roam, harvest or disappear as they choose.”

The Organ Mountains-Desert Peaks Conservation Act (S. 441), introduced by Sens. Martin Heinrich and Tom Udall of New Mexico, which would designate as wilderness critical wildlife habitat located within Organ Mountains-Desert Peaks National Monument, keeping these areas open and accessible to hunters and members of the public but upholding places important to both sportsmen and game species.
“Wilderness areas provide crucial habitat security for a variety of big and small game species alike,” said Ray Trejo, a BHA member from Deming who hunts the Organ Mountains. “Organ Mountains-Desert Peaks National Monument encompasses close to half a million acres of public lands and waters that are, in a word, irreplaceable. The bill introduced by Senators Heinrich and Udall will help secure the area’s most important habitat for desert mule deer, mountain lion, javelina, waterfowl and quail, as well as hunting opportunities prized by sportsmen in New Mexico and elsewhere.”

The Protect Public Use of Public Lands Act (S. 2206), introduced by Sen. Steve Daines of Montana, which would eliminate wilderness study area designations from – and open potential development on – close to a half-million acres of public lands in the Treasure State.
“Montana’s wilderness study areas were identified 40 years ago as special, wild places, worthy of careful management,” said John Sullivan, Montana BHA chapter chair, of Missoula, “and many sportsmen and women rely on these areas to hunt, fish and reconnect with the landscape. We agree that some WSAs in Montana are overdue for action, including finalizing management plans; however, forcing a top-down and broad-brush approach without any local input is irresponsible. Not to mention that the bill’s targeting of areas attractive to special interest development and resource extraction interests is disingenuous. With this bill, Senator Daines once again is ignoring the majority of Montanans, who want to protect some of our last, best accessible and public wild backcountry.”

BHA has launched a petition criticizing S. 2206 and enabling hunters, anglers and others to speak up in support of Montana’s wilderness study areas.