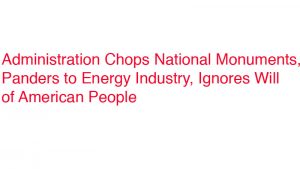 The president traveled to Utah on Monday where he is expected to announce massive cuts to Bears Ears and Grand Staircase-Escalante national monuments, impacting millions of acres and opening to industrial development areas prized by sportsmen and others. The administration’s planned decision launches a wholesale assault on American public lands and citizens who own them, leaving no doubt about the president’s intentions for the future of these lands and his loyalty to extractive industries and big business.

“America’s conservation legacy defines us and is the envy of the world,” said BHA President and CEO Land Tawney. “Today is a dark day for that legacy. Roosevelt is shaking his fists! Undermining one of our bedrock conservation laws and selling out to industry flies in the face of T.R., who President Trump said he wanted to emulate.

“Grand Staircase-Escalante in particular is troubling with the administration’s concessions for the coal industry,” Tawney continued. “This carve-out is smack dab in the middle of some of the most important habitat for desert bighorn sheep and will impact that species immensely – all for some coal that will most likely be sent to China. An attack on one monument is an attack on them all and sets a precedent that none are safe, both existing and future.”

If implemented, the changes to the two Utah monuments would negatively impact key fish and wildlife habitat, reduce outdoor opportunities important to sportsmen and critical to local economies, and undermine a bedrock conservation law, the Antiquities Act, that has enabled the long-term protection of millions of acres. The president’s action culminates a months-long review during which millions of public comments reiterated citizens’ strong support for national monuments. BHA members and supporters rallied behind America’s monuments system, highlighting the importance of the Antiquities Act in conserving the places and traditional uses valued by sportsmen and women.

“The intimate connections that hunters and anglers cultivate with landscapes and wildlife are unique,” said BHA Utah chapter chair Joshua Lenart, who lives in Salt Lake City. “The valuable public lands and public access in Bears Ears and Grand Staircase-Escalante national monuments provide sportsmen and women with unparalleled outdoors experiences. This action sets a frightening precedent for some of the most beloved places in our country and cannot stand uncontested.”

“There’s no net gain to the administration’s plan; there can only be net loss,” said BHA member Jay Banta, a career natural resource manager who lives in St. George. “Utah’s strong and growing recreation-based economy – and particularly the economic health of gateway communities to the monuments – rely on the continued conservation of Bears Ears and Grand Staircase-Escalante as national monuments.”

As outlined in this report released by BHA and a consortium of outdoor groups and businesses, when done right, the designation of national monuments can be a critical tool to safeguard important fish and wildlife habitat while maintaining traditional hunting and fishing access.

“What’s next on the chopping block for America’s public lands?” Tawney asked. “The Arctic National Wildlife Refuge? Boundary Waters Canoe Area Wilderness? The vast sage steppe ecosystem across the West? It is time for America’s hunters and anglers to stand up and resist these ill-fated ideas that benefit just a few. We are compelled to speak for the landscapes and the fish and wildlife who cannot speak for themselves.”

Review BHA’s national monument habitat maps, which highlight data on fish and wildlife habitat and hunting and fishing opportunities at risk in the wake of the administration’s review.

What would Theodore Roosevelt do?