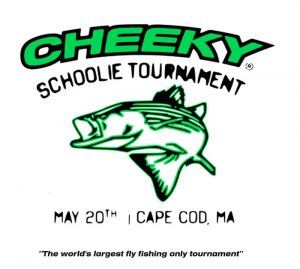 The annual Cheeky Schoolie Tournament is a low barrier to entry, grass roots style event designed to encourage the interest in and growth of saltwater fly fishing and to welcome our hard working schoolie stripers to their summer vacation home on Cape Cod, MA. The 2017 Tournament marked the 6th year for the annual event, which has become the world’s largest fly-fishing tournament. The unique, grassroots style event provides the opportunity for anglers of all skill levels to cast flies at early season striped bass and vie for thousands of dollars in fly fishing prizes! The tournament is teams of two, catch-and-release and wade-fishing only.

Fly fishermen and women have been anticipating the 2017 Schoolie Tournament since registration opened in late January, and promptly sold out. This year’s event, marking the 6th annual, turned out over 330 participants, including seasoned Cape Cod veterans, travelers from as far as Alaska and rookies hunting their first striped bass.

With the number of female participants increasing every year, Cheeky Ambassador Abbie Schuster of Kismet Outfitters took the lead on kicking off the tournament weekend with a Women’s Meet-Up on Friday afternoon. With equipment provided, attendees got a chance to practice and prepare for the tourney with casting lessons, knot tying, and strategy discussion, hoping to make some waves in the tournament the following day!

With the number of participants increasing annually and the incredible class of juvenile striped bass that have invaded coastal Massachusetts within the recent weeks, there was a premium on finding big fish more than ever before. With over 6000 cumulative inches of striped bass caught and released in the 2017 tournament, there was no shortage of fish for anglers to catch. Teams not only had to find fish but weed through the “future giants” for bigger fish.

here was nothing but good vibes radiating from those in attendance for the award ceremony at The Swan River Restaurant. The winning teams took their place on the podium to a round of applause and claimed their monster prize packages, which included a Cash prize, Cheeky Reels, Costa Sunglasses, Yeti Coolers and more! The awards were followed up by a giant raffle. Anglers of all ages held their tickets high with fingers crossed, hoping to take home some of the $10,000+ in prizes generously provided by the event’s great sponsors. The raffle culminated with one competitor taking home a YETI Tundra Cooler. Only minutes after the conclusion of the event, conversations quickly switched to the discussion of 2018’s event. The tournament record for largest fish landed was set in 2015 when a 38” beast was landed. This record still stands as a challenge for next year’s competitors.

With a full calendar year to prepare and refine skills, 2018’s field will be coming with the vengeance to unseat Team Deceiver from their throne. Amongst the salt shorelines and scenic beaches of Cape Cod, there truly is no better place to hunt down your personal best striped bass on the fly.

Keep an eye out for 2018 registration announcements next January. We hope to see next year at the Cheeky Schoolie Tourney!