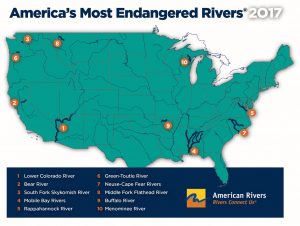 American Rivers today released its annual list of America’s Most Endangered Rivers®, identifying ten rivers facing urgent threats and critical decisions this year. The list highlights the dangers Trump Administration budget cuts pose to rivers and communities nationwide. Number one on this year’s list is the Lower Colorado River, where the communities, economy, and natural resources of the southwestern U.S. will be threatened if the Trump Administration and Congress don’t prioritize and fund innovative water management solutions.

“This is a critical year for rivers and clean water,” said Bob Irvin, President of American Rivers. “Water is one of the most crucial conservation issues of our time. The rivers Americans depend on for drinking water, jobs, food, and quality of life are under attack from the Trump administration’s rollbacks and proposed budget cuts.”

“Americans must speak up and let their elected officials know that healthy rivers are essential to our families, our communities and our future. We must take care of the rivers that take care of us.” Irvin said.

President Trump has abandoned critical river protections including the Clean Water Rule, leaving small streams and wetlands – sources of drinking water for one in three Americans – vulnerable to harmful development and pollution. He has also proposed significant budget cuts that would cripple river restoration and protection efforts nationwide, with severe impacts to drinking water supplies, fish and wildlife and recreation.

These cuts would impact the rivers on this year’s America’s Most Endangered Rivers list. For example, cuts to the Department of the Interior and Department of Agriculture could hamstring efforts to find water management solutions to meet the crisis on the Lower Colorado River. Cuts to the Environmental Protection Agency could undermine regulation of pollution from Concentrated Animal Feeding Operations like those on the Neuse-Cape Fear and the Buffalo National River.

Virtually zeroing out the Land and Water Conservation Fund would eliminate opportunities such as the conservation purchases that have helped protect Washington’s Green River. And, dramatic cuts to the Department of the Interior likely would foreclose any opportunity to adequately fund the proper planning, management, and protection of the neglected Wild and Scenic Rivers System, including the Buffalo National River and Middle Fork Flathead — a sorry state of affairs as the Wild and Scenic Rivers Act approaches its 50th anniversary in 2018.

America’s Most Endangered River, the lower Colorado, provides drinking water for 30 million Americans, irrigates fields that grow 90 percent of the nation’s winter vegetables and slakes the thirst of growing cities including Los Angeles, San Diego, Las Vegas and Phoenix. But the water demands of Arizona, Nevada and California are outstripping supply, the impacts of climate change are becoming acute, and the river is at a breaking point.

The water level of Lake Mead reservoir behind Hoover Dam is dropping by an average of 12 feet per year. This spring’s snowmelt will ease the drop this year, but the long-term trend is not altered by one wet winter. If the long-term deficit is not addressed, the Bureau of Reclamation will be forced to cut water deliveries, with severe economic impacts to farms and cities across Arizona, Nevada and California.

Unfortunately, the Trump Administration’s Fiscal Year 2018 Budget proposal threatens to reverse progress made by states, cities and farmers to reduce water consumption across the three states. American Rivers called on Congress and the Trump Administration to provide support, leadership and financial resources for innovative water savings and transfer projects to conserve and share the region’s water assets.

The future of the Lower Colorado River is of particular importance to the region’s Latino communities. One-third of the nation’s Latinos live in the Colorado River Basin. The significance of the river to the faith, livelihood and future of Latino farm-working families is showcased in the new film Milk and Honey, produced by American Rivers and the Hispanic Access Foundation. Watch the film trailer: https://vimeo.com/203244799

“The Lower Colorado River is an integral part of our heritage and way of life. From serving as the backbone for the agricultural industry to providing a cultural focal point for faith communities, the Lower Colorado River is essential to the livelihood of the Southwest,” said Maite Arce, President and CEO of Hispanic Access Foundation. “By taking action now we can make strides in ensuring that future generations can continue to benefit from this tremendous resource.”

American Rivers and the Hispanic Access Foundation urged the Trump Administration and Congress to support innovative water management solutions including:

• Pursuing lower impact supplies first (water reuse; treating wastewater so it can be recycled for irrigation or other uses).

In its 32nd year, the annual America’s Most Endangered Rivers® report is a list of rivers at a crossroads, where key decisions in the coming months will determine the rivers’ fates. Rivers are chosen for the list based on the following criteria: 1) The magnitude of the threat, 2) The significance of the river to people and nature and 3) A critical decision-point in the coming year.

Over the years, the report has helped spur many successes including the removal of outdated dams and the prevention of harmful development and pollution.

America’s Most Endangered Rivers® of 2017:

American Rivers protects wild rivers, restores damaged rivers, and conserves clean water for people and nature. Since 1973, American Rivers has protected and restored more than 150,000 miles of rivers through advocacy efforts, on-the-ground projects, and an annual America’s Most Endangered Rivers® campaign. Headquartered in Washington, DC, American Rivers has offices across the country and more than 250,000 members, supporters, and volunteers.