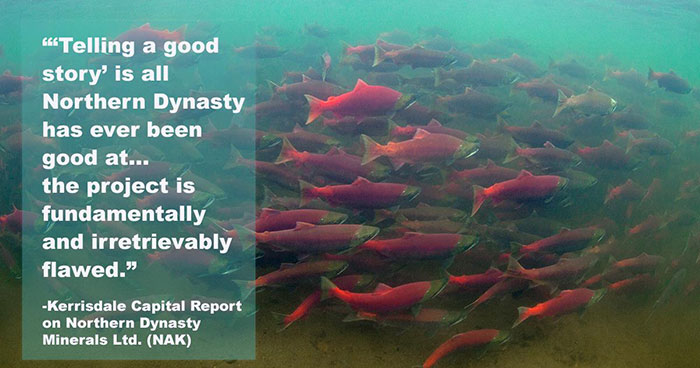 In response to a report released by Kerrisdale Capital Management today stating, “we believe Northern Dynasty is worthless […] and not commercially viable,”

“For years, Alaskans and sportsmen have understood Pebble Mine is a bad economic idea because it threatens a world renown resource of wild salmon and trout that has provided American jobs and a once-in-a-lifetime recreation destination for anglers around the globe,” said Nelli Williams of Trout Unlimited. “A study released this morning confirms once again that this mine a bad deal for the Alaskans who would have to suffer the consequences of the project.”

“As a Bristol Bay business owner I have long believed that the best investment in the region is in the fishery, not the Pebble Mine. Bristol Bay supports more than 14,000 American jobs. For more than a decade sportsmen have joined forces with Alaska Native communities, commercial fishermen, Alaskans and Americans to protect this resource,” said Brian Kraft, Owner of Alaska Sportsman’s Lodge in Bristol Bay. “This report [from Kerrisdale Investments]confirms what we have long known about the Pebble Mine. I hope that Governor Walker and President Trump both recognize the importance of keeping this intact ecosystem and habitat functioning in its natural state. Existing American jobs, a Native Alaskan culture, the largest commercial fishery in the world, and a thriving sport fishing business all depend on it!”

Trout Unlimited is the nation’s oldest and largest coldwater fisheries conservation organization. In Alaska, we work with sportsmen and women to ensure the state’s trout and salmon resources remain healthy through our local chapters and offices in Anchorage and Juneau. Follow TU on Facebook or visit us online at tu.org and savebristolbay.org.