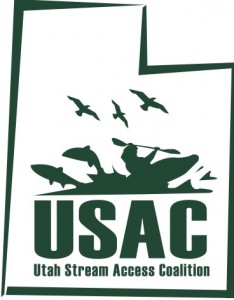 In an historic battle for Utah recreationalists, the Utah Supreme Court will hear arguments on two lawsuits filed by the Utah Stream Access Coalition (USAC) back-to-back on January 9, 2017. The first seeks to affirm that the 2010 “Public Waters Access Act” is unconstitutional, as determined by 4th District Court Judge Derek Pullan in November 2015. The Act, contrary to its title, effectively disposed of the public’s right to use over 2,700 miles of Utah’s rivers and streams where they ostensibly cross over private property, many miles of which have benefited from publicly-funded habitat and stream bank restoration, flood abatement, and other projects. Judge Pullan’s decision temporarily re-opened Utah’s rivers and streams to public use prior to being stayed by the Utah Supreme Court pending the case’s appeal.

The second argument seeks to affirm Judge Keith Kelly of Utah’s 3rd District Court ruling in favor the public’s right to access and recreate on the Weber River, one of Utah’s premier canoeing, kayaking, and blue-ribbon trout streams. In the April 2015 ruling, Judge Kelly confirmed navigability and public ownership of the streambed of the Weber River by acknowledging the statehood-era use of the Weber River to float logs from the headwaters in the Uinta Mountains downstream where they were used for construction of the Union Pacific Railroad, timbers for the mines in Park City, and cordwood. Property rights advocates and the State of Utah appealed both rulings to the Utah Supreme Court last year.

“We are witnessing Utah history being made,” said Coalition President Kris Olson, “not only is the High Court considering the historic and cultural significance our rivers had on settling the West, but our constitutional rights to use a resource that belongs to all of us – sportsmen, recreationists, and property owners alike.” The USAC anticipates the Supreme Court will adhere to its own precedent, and affirm the trial courts’ rulings in favor of public access and lawful use of Utah’s public waters.

The Utah Supreme Court will hear oral arguments in both cases at the Matheson Courthouse in Salt Lake City at 0930 and 1015 on January 9, 2017.