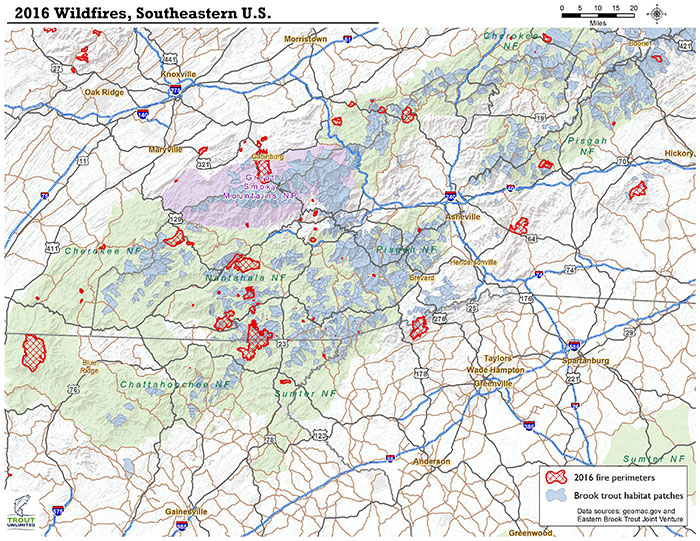 The Southeast fires in early December were in areas overlapping with brook trout habitat.

Sadly, we’re used to reporting on wildfires and their effects on trout fishing in the West.  But the recent spate of wildfires in the East have many wondering what impact that will have.  TU is on the case already…

As of December 1st of 2016 the National Interagency Fire Center counted 18 large active wildfires from Virginia to Georgia, which have burned tens of thousands of acres and resulted in tragic loss of life and property.

As we begin to move on from those events, some may wonder what effect the fires will have on trout streams in the region. At the moment it’s too soon to tell, as state and federal agency biologists are still assessing the situation. While we await more specific information, here’s a review of some of the relevant science on fish and fire.

Fire is a natural part of the landscape in the Southeast historically. Studies of Appalachian fire history have found that fires occurred regularly, even down into riparian zones, for at least the past 4,000 years. Brook trout and fire go way back.

·        Studies from the West have found that, “The timing and severity of erosion and sedimentation differ by geography, geology, precipitation regime, and fire regime. … Chronic erosion tends to deliver fine sediment over long periods, typically in the absence of revegetation or from roads and fire lines. In contrast, pulses of sediment and large wood are delivered to streams by post-fire landslides and debris flows.”  (Bisson et al. 2003.  Fire and aquatic ecosystems of the western USA: current knowledge and key questions.  Forest Ecology and Management 178: 213-229.)

The ultimate effects of the fires in the Southeast remain to be seen, but thanks to ongoing monitoring efforts by state and federal agencies in the region we expect to learn a great deal about how the fires influence the region’s trout and their habitats.

If any local trout populations are lost, a very important factor in their ability to recover will be habitat fragmentation. In August 2011, the Saddle Complex Wildfire, a high severity fire, burned Woods Creek, located on the West Fork Ranger District of the Bitterroot National Forest in Montana.

Woods Creek is a trout stream located in a densely forested, upper elevation spruce/fir environment. The creek contained healthy populations of Westslope cutthroat trout and bull trout prior to the burn. Sampling in 2011 after the burn revealed a large fish kill of both species. However, the following year Forest Service personnel re-sampled Woods Creek and found both species had moved back into the burned areas and numbers were increasing. (Jakober, M. 2014. Fish Biologist. Bitterroot National Forest. Personal communication with C. Purves, Trout Unlimited, April 14, 2014.)

The reason Woods Creek was able to bounce back was that trout from nearby streams were able to move into Woods Creek and recolonize the habitat. Where habitat is fragmented by dams or impassible culverts, trout will not have the same ability to recolonize habitat.

In the Southeast, habitat fragmentation is a serious issue. To take North Carolina as an example, brook trout habitat patches there average just under 1,600 acres in size, significantly smaller than they would have been historically. Ten wildfires larger than 1,600 acres are actively burning near habitats supporting southeastern brook trout. The largest is nearly 25,000 acres. When the scale of environmental disturbances exceeds the size of our remaining interconnected brook trout habitats, those populations are less resilient and more vulnerable to blinking out.

Working with the U.S. Forest Service and North Carolina Wildlife Resources Commission over the past two years, Trout Unlimited reconnected 13 miles of brook trout habitat that had been fragmented by dams and culverts. (See TU’s Project Finder for project descriptions.) The fires are an important reminder that we must continue improving brook trout habitat connectivity in order to increase resiliency to future impacts.

We continue to keep the residents of Gatlinburg in our thoughts and prayers, and join the region in thanking the firefighters and emergency personnel for their work and dedication over these last months.