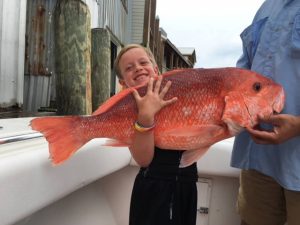 The Gulf States Red Snapper Management Authority Act, lobbied for and pushed by a cadre of fishery rights groups—the American Sportsfishing Association, the Center for Coastal Conservation, the Coastal Conservation Association, and the Theodore Roosevelt Conservation Partnership—would shift management of the red snapper fishery from the National Marine Fisheries Service to a newly created Management Authority, much like striper to the Atlantic States Marine Fisheries Commission.

And we have witnessed how well this has worked for the American striped bass.

In Graves’s H.B. 3094, states would not receive federal funding to conduct stock assessments, research, data collection, or regulation enforcement necessary to manage the fishery. But most damning and challenging is that the new burden of management and enforcement would start at the beach and extend 200-nautical miles to the edge of the exclusive economic zone.

For states like Florida, that should really denounce this bill, this increases the state waters it manages exponentially, when FWC already bemoans that they do not have the wardens to enforce the waters they already oversee. Not to mention the burdens placed upon the State of Florida taxpayer to cough up the funding required to research this increased management over a singular species and the additional costs to state employees away from family and the agency to send them to the newly formed Management Authority meetings. These costs only can be raised by either burdening the Florida taxpayer or passed along in a pay for play system that will increase license fees, possibly harming the state’s recreational fishing industry.

The Louisiana Department of Wildlife and Fisheries, in an unprecedented move by its new secretary, former Congressman Charlie Melancon, issued a press release denouncing the bill for the very reasons that Florida should. Melancon stated that “it would be fiscally irresponsible for the Department to support any mandate that would result in an unknown amount of fiscal burden placed on the State of Louisiana for the management of a single species of fish.” This is a lead that the FWC should consider, when applying Governor Rick Scott’s Tea Party smaller government mores to the states’ fiscal and natural resources.

But beyond the fiscal responsibilities, the FWC, chartered with doing the best thing for the state’s natural resources, should consider the success the red snapper fishery has experienced under federal management system.

Since 2007, when the Magnuson Stevens Fishery Conservation and Management Act began managing with strict, science-based rebuilding timelines and mandatory annual catch limits, the fishery’s total allowable catch has gone from roughly 5-million pounds in 2007 to over 14.1-million pounds in the 2015 season.

The FWC, who oversees Destin–one of, if not, the largest recreational fleets in the world—and a thriving commercial industry that supplies the state’s iconic Gulf grouper sandwich, should very much be aware that the Graves bill, especially at the hands of the recreational interests that lobbied for it, is a threat to both of these and the state’s economic health. Deep within the bill’s language is a provision that states that after three years, the states can begin changing the current fishery management plans. This is a threat to two of Florida’s largest tourism industries and the growth and stability witnessed within the fishery under the federal management system.

The FWC meets September 8-9, 2016, where this issue will be discussed. If we as anglers and industry leaders are serious about protecting the resource that funds our businesses and lifestyles, we would all do well in asking the FWC to follow the LWDF’s lead and denounce this bill. Until the federal management system fails the resource, shouldn’t we stick with it instead of changing tact when 2/3s of the fishery is stable and working to protect the resource and get their sector more days on the water in the process? The Graves Bill is a fish grab in the making, and we need to make sure that every stakeholder and taxpayer is protected.